Secretary-General Ban Ki-moon, the top United Nations envoy for Lebanon and the Security Council have condemned today’s double bombing in the area of Bir Hassan in the southern Beirut suburbs that killed and wounded a number of people.

In a statement issued by his spokesperson, Mr. Ban extended his condolences to the families of the victims and the Government and people of Lebanon.

“The Secretary-General notes the active efforts of the Lebanese army and security forces in working to detain terrorist suspects and prevent attacks, and calls for the perpetrators of this crime to be brought to justice,” his spokesperson added.

UN Special Coordinator for Lebanon Derek Plumbly called on the Lebanese to remain united in the face of such “appalling and indiscriminate terrorist actions” and to build on the positive step taken a few days ago with the formation of a new Government by rallying around their state institutions to safeguard their country’s security and stability.

“He reiterated the commitment of the international community to supporting Lebanon in these efforts,” added a statement issued by the Special Coordinator’s office.

The 15-member Security Council “strongly condemned” the attack, which it noted took place in the vicinity of an Iranian cultural centre, and killed at least 8 people and wounded more than 100. A group linked to Al-Qaida has claimed responsibility.

“The members of the Security Council reaffirmed that terrorism in all its forms and manifestations constitutes one of the most serious threats to international peace and security, and that any acts of terrorism are criminal and unjustifiable, regardless of their motivation, wherever, whenever and by whomsoever committed,” the Council said in a statement issued to the press. 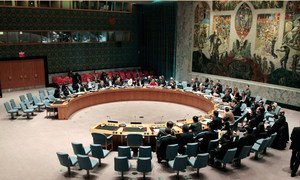 United Nations Secretary-General Ban Ki-moon and the Security Council have strongly condemned the “heinous” terrorist attack that took place today in Hermel, Lebanon, a town near the country's northern border, which killed at least four people and wounded dozens of others.