IRIN/Nicholas Long
Destroyed houses in the village of Boyeli, near Bozoum, Central African Republic, burned by the Séléka in January 2014.

14 February 2014
Warning that “dark clouds of mass atrocities” are looming over the Central African Republic (CAR), Secretary-General Ban Ki-moon today called for solidarity and concerted action by the United Nations and regional organizations to help the people of the strife-torn nation.

“The United Nations and its regional partners face an urgent test,” Mr. Ban said, referring to the situation in CAR in his remarks to the Security Council’s meeting on cooperation between the UN and regional organizations.

“The dark clouds of mass atrocities and sectarian cleansing loom over the Central African Republic,” he added. “Public lynchings, mutilations, and other horrendous acts of violence are spreading mayhem and fear. All Central Africans have been victims, Muslims and Christians alike.”

Thousands of people are estimated to have been killed in the conflict in CAR, which erupted when mainly Muslim Séléka rebels launched attacks in December 2012 and has taken on increasingly sectarian overtones as mainly Christian militias known as anti-Balaka (anti-machete) have taken up arms. The conflict has also left an estimated 2.5 million people – well over half of the country’s 4.6 million residents – in need of humanitarian assistance.

Mr. Ban said that peace, security, human rights, development – everything the UN stands for and seeks to promote – is under assault.

“We must live up to the promises made around this table to act swiftly and robustly in the face of such bloodshed. We cannot claim to care about mass atrocity crimes and then shrink from what it means to actually prevent them.”

“Our commitment to protect civilians is only as meaningful as the political, military and financial muscle deployed to defend them,” the Secretary-General stated. “Our responsibility is clear: We must stand with the people of the Central African Republic.”

Mr. Ban commended the Economic Community of Central African States (ECCAS) and the African Union (AU) for their intensive efforts to address the crisis and for the establishment of the African-led International Support Mission in the CAR (MISCA).

He also thanked the Government of France for deploying its forces, and said he looked forward to the forthcoming military contributions by the European Union (EU), to be coordinated with the MISCA operation.

“I am committed to do everything in my power to prevent further atrocities and reduce the risk of de facto partition of the country. Now we must act together, we must act decisively and we must act now to prevent the worst.”

Mr. Ban added that he intends to return to the Council on Tuesday with recommendations for containing and then ending the crisis. “I look forward to discussing with you what it will take to urgently curtail the violence, save lives, protect human rights, support the delivery of humanitarian assistance and strengthen command and control of the forces on the ground.

“This will be a crucial opportunity to fortify our collective efforts – a chance to show that cooperation between the UN, AU, EU and others can help the people of the CAR at their time of need.”

Today’s meeting, chaired by Foreign Minister Linas Linkevicius of Lithuania, which holds the Council’s rotating presidency for February, is focusing in particular on cooperation between the UN and the EU.

This cooperation stretches “across our agenda and around the world,” said Mr. Ban, who added that the EU’s “many and generous” contributions to the UN embody the kind of multidimensional approach that is needed to foster sustainable peace and development.

Also addressing the meeting, the EU’s High Representative for Foreign Affairs and Security Policy, Catherine Ashton, reiterated that body’s strong commitment to support and work for effective multilateralism, with the UN at its core, in search of lasting solutions to critical international peace and security challenges.

In remarks that touched on a wide range of global issues in which the EU is involved, Ms. Ashton said the body’s contribution involves: direct involvement in international negotiations on behalf of the international community; capacity to implement a comprehensive approach and use a wide range of tools to solve crisis; and close work with international and regional partners, where only collective efforts can deliver results.

In a presidential statement adopted during the meeting, the Security Council welcomed the EU’s strong engagement in CAR, notably its humanitarian assistance, its financial contribution to the deployment of MISCA, as well as the decision to establish a temporary operation to support MISCA.

It also commended the EU’s role and engagement in a range of international issues, including combating piracy off the Somali coast, as well as the “extensive” cooperation between it and the UN with regard to the crisis in Syria, the Middle East Peace Process, Afghanistan and other areas of mutual concern. 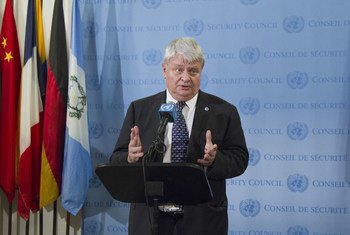 30 November 2012
The United Nations peacekeeping chief today highlighted the growing level of cooperation between the UN and the European Union in tackling problems springing from many of the world’s hotspots.