UN Photo/Fardin Waezi
UNAMA human rights chief, Georgette Gagnon, pays a visit to a boy who was seriously injured by an IED explosion in February 2013.
8 February 2014

Civilian casualties in Afghanistan rose by 14 per cent last year, according to a new report released on Saturday by the United Nations, which also found that it was the worst year since 2009 in terms of the number of women and children killed or injured as a result of conflict-related violence.

The 2013 Annual Report on Protection of Civilians in Armed Conflict, produced by the UN Assistance Mission in Afghanistan (UNAMA), recorded a total of 8,615 civilian casualties with 2,959 civilian deaths and 5,656 injured last year.

“Armed conflict took an unrelenting toll on Afghan civilians in 2013,” said the Secretary-General's Special Representative for Afghanistan and head of UNAMA, Ján Kubiš.

Presenting the report at a news conference in the capital, Kabul, he added that the “overwhelming majority” of civilian deaths are due to actions of anti-Government elements, including, but not limited to, the Taliban. There are also more civilians being killed and injured as a result of direct engagement between the anti-Government elements and the Afghan National Security Forces (ANSF), he noted.

“At the start of 2014, it is imperative that all parties, but particularly anti-Government elements, halt the worsening impact of the conflict on Afghan civilians,” Mr. Kubiš stressed.

The report also found that 2013 was the worst year for Afghan women, girls and boys since 2009 in terms of casualties resulting from conflict-related violence. There were 235 women killed and 511 injured, an increase of 36 per cent from 2012. IEDs used by anti-Government elements were the main cause of deaths while ground engagements accounted for most of the injuries.

UNAMA documented 561 children killed and 1,195 injured in 2013, an increase of 34 per cent compared to the previous year. IEDs caused the most child casualties, killing 192 and injuring another 319, followed by ground engagements.

“It is particularly alarming that the number of Afghan women and children killed and injured in the conflict increased again in 2013,” said the Director of Human Rights for UNAMA, Georgette Gagnon. “It is the awful reality that most women and children were killed and injured in their daily lives – at home, on their way to school, working in the fields or traveling to a social event.

“This situation demands even greater commitment and further efforts by the parties to protect women and children from conflict-related violence.”

UNAMA's report found that anti-Government elements continued to deliberately target civilians across the country and carried out attacks without regard for civilian life, causing 6,374 civilian casualties, including over 2,000 deaths.

Throughout 2013, the Mission noted increased public messaging by the Taliban on civilian casualties. However, the situation on the ground for Afghan civilians did not improve. The Taliban increased their indiscriminate use of IEDs and continued to attack civilians.

UNAMA highlighted that indiscriminate attacks and direct targeted attacks against civilians are strictly prohibited under international humanitarian law which binds all parties to the conflict in Afghanistan including the Taliban. Attacks on civilians and killings of mullahs, elections workers, tribal elders and other civilians not directly participating in hostilities may amount to war crimes.

“Statements on protecting civilians by the Taliban leadership are not nearly enough to end the killing and injuring of innocent Afghan civilians,” said Mr. Kubiš. “What is needed is for the Taliban to stop deliberately attacking civilians and using IEDS indiscriminately, and to change their definition of 'civilian' and lawful targets in line with international humanitarian law.”

With Afghan forces leading military operations country wide, UNAMA reinforced the need for improved implementation of directives and rules of engagement mandating civilian protection, and for permanent structures in the Ministries of Defence and Interior to investigate reports of civilian casualties by Afghan forces, initiate remedial measures and take follow-up action.

It also called on the Afghan Government to investigate any allegations of human rights violations by Afghan forces as required under Afghan and international law.

“Behind every civilian casualty is a man, woman or child's life and immense suffering and hardship for an Afghan family and community,” said Ms. Gagnon. “Reduced civilian suffering and fewer civilian casualties together with improvements in human rights protection should be the core benchmarks of improved stability and efforts toward peace in the security and political transition in 2014.” 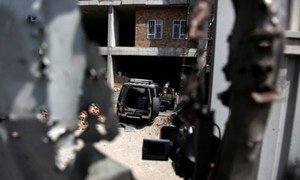 The number of Afghan civilians killed or injured in the first half of 2013 rose by 23 per cent compared to the same period last year, owing mainly to the increased use of improvised explosive devices (IEDs) by insurgents, according to a United Nations report released today.