UNHCR
Displaced people in Tartous, western Syria, are among the millions who have received UNHCR assistance.
5 February 2014

The number of people displaced by the civil war inside Syria is expected to nearly double from some 3.5 million today to 6.5 million by the end of the year, a senior United Nations official said today.

Nearly 2.5 million others have already sought refuge in neighbouring countries, the UN refugee agency (UNHCR) Regional Coordinator for Syria, Amin Awad, told a news conference at UN Headquarters in New York, noting that the total funding sought for both refugees and internally displaced persons (IDPs) for 2014 totals $6.5 billion, $2.4 billion for the former and $4.2 billion for the latter.

“That’s a big amount of money,” he said. “However, that statement is accurate. There are 155 agencies, UN and non-governmental organizations [involved].”

Major targets of the funding are protection, education and shelter for the displaced.

Mr. Awad said 85 per cent of the refugees were not staying in camps but with host communities, putting an “incredible strain and impact” on these communities, given their meagre resources, employment and services, calling it an “overwhelming emergency.” UNHCR planned to boost its support for them, he added.

Beyond the IDPs there are another 3 million people inside Syria in desperate need for help and among the refugees there are 8,000 children who have been separated from their families, he said. 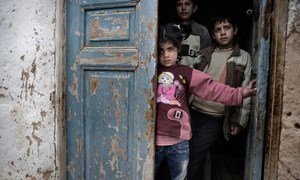 Syrian children have been subjected to “unspeakable” suffering in the nearly three years of civil war, with the Government and allied militia responsible for countless killings, maiming and torture, and the opposition for recruiting youngsters for combat and using terror tactics in civilian areas, according to the first United Nations report on the issue.