New UN airlift ships food from Iraq to 30,000 Syrians cut off on land by civil war

WFP/Dina Elkassaby
Recent assessments show that almost half the population inside Syria is having trouble getting enough food.
4 February 2014

The United Nations today began a new airlift from Iraq to feed nearly 30,000 displaced people in a conflict-torn region of northeast Syria where road access has been cut off for over six months and no significant relief deliveries have arrived overland since last May.

The airlift comes as the UN World Food Programme (WFP) faces in Syria what is currently its most complex emergency globally, with challenges ranging from bureaucratic delays, insecurity on roads, the closure of major highways, and sieges imposed on civilians trapped in over 40 locations across the country due to the civil war.

“It is tragic to see the most vulnerable Syrians going hungry and paying the heavy price for a political conflict with no end in sight,” WFP Executive Director Ertharin Cousin said as her agency’s airlift started from Erbil, in Iraq’s Kurdish region, to Qamishli, in Syria’s Al Hassakeh Governorate.

“We call upon all parties to provide us with continuous and unimpeded access across the country. WFP should be able to reach all those who need food assistance all the time.”

At WFP-chartered flight landed at Qamishli today with 40 metric tons of mixed food including rice, pasta, bulgur, wheat flour, canned food, pulses, salt, vegetable oil and sugar, the first of 10 flights that will deliver over 400 metric tons of WFP food and other items – mainly clothes, detergent and soap – for the UN Children’s Fund (UNICEF) and the International Organization for Migration.

WFP airlifted food from Erbil to Qamishli in December for more than 62,000 people.

Overall, WFP dispatched in January enough food for 3.6 million people in Syria, short of its target of 4.25 million people as the governorates of Raqqa, Deir Ezzor, Rural Aleppo and Al-Hassakeh were inaccessible. The closure of the Daraa-Damascus highway has also affected the dispatch of food to parts of Daraa, Quneitra, Damascus and Rural Damascus.

Security has deteriorated in Al Hassakeh Governorate in the last few weeks, displacing large numbers of people. Recently, around 7,500 people fled clashes that erupted in rural areas to Qamishli city while others fled towards the Iraqi border.

“The road to political stability and confidence building in Syria starts with an important step: ensuring no one dies because of a lack of food or medicine or from the cold when humanitarian workers are nearby but are not allowed in” Ms. Cousin said of the three-year-old civil war. “Syrians must have their most basic needs met.”

As hunger in Syria grows, WFP is appealing for over $2 billion to assist more than 7 million Syrians in urgent need of food aid in 2014. These include 4.25 million people inside Syria and over 2.9 million refugees in neighbouring countries. 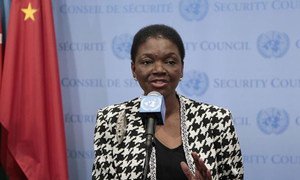 Reporting “modest progress” with the Syrian Government on speeding up visa issuance and increasing the number of relief distribution hubs, a top United Nations official said today that with perhaps 250,000 Syrians cut off from aid in besieged communities across the war-torn country, greater efforts are needed to ensure real gains on the humanitarian front.