Representatives of the Syrian Government and opposition groups today discussed humanitarian issues and tomorrow will focus on release of prisoners and kidnapped victims, the Joint Special Representative of the United Nations and the League of Arab States today said following the opposing sides' first ever meeting at a negotiating table.

“We haven't achieved much, but we are continuing,” Lakhdar Brahimi told reporters at the Palais des Nations in Geneva.

“The situation is extremely complex, it is a very difficult situation, and we are moving not in steps but even in half-steps,” the joint envoy noted after two sessions with both groups.

He said getting an aid convoy into the city of Homs topped the agenda of today's afternoon meeting which lasted roughly two hours.

“We hope that ultimately that some convoy of aid, goods, both food and non-food items, and some medical supplies will be allowed to go into the old city,” said Mr. Brahimi.

The governor of Homs, who has been speaking to the UN team in Damascus, is expected to meet with his security advisor tomorrow about the convoy, the joint envoy added, “if it's allowed tomorrow, maybe it will go in on Monday”.

Well over 100,000 people have been killed and nearly 9 million others driven from their homes since the conflict erupted in March 2011 between the Government and various groups seeking the ouster of President Bashar al-Assad.

More than 9.3 million people within the country need humanitarian aid, the UN has said, with over 2.5 million of them living in areas where access is seriously constrained or non-existent, such as Homs.

“If we achieve success on Homs, we hope that this would be the beginning for us to discuss other issues,” he told the journalists.

Today was the first time that both sides met in the same room where “one delegation is on the left, one is on the right, and they face one another”.

No direct words have been exchanged but the two sides talk through Mr. Brahimi with one another.

“This is what happens in civilised discussions,” he said, where sides address each other through a chairperson. “I think it's a good beginning.”

Mr. Brahimi said he expects to resume talks with both sides again tomorrow morning to discuss “prisoners and people that have been kidnapped and see if something can be done to secure the freedom of not all but at least some people who have been deprived of their freedom”. 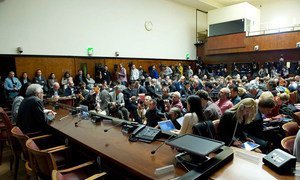 Representatives of the Syrian Government and opposition groups have agreed to meet tomorrow for the first time ever in the same room, the Joint Special Representative of the United Nations and the League of Arab States said in Switzerland after another day of bilateral talks with both sides, which he described as “encouraging.”