The United Nations today called for security to be re-established along the main roads in strife-torn Central African Republic (CAR) to allow access for vital aid and humanitarian staff as 38 trucks with a month’s supply of food for 155,000 people remained blocked at the frontier.

But despite the ongoing violence and insecurity, the UN World Food Programme (WFP) is providing aid to more than 110,000 displaced people in Bangui, the capital, and other towns, WFP spokesperson Elisabeth Byrs told a news briefing in Geneva.

Thousands of people are estimated to have been killed, and 2.2 million, about half the population, need humanitarian aid in a conflict which erupted when mainly Muslim Séléka rebels launched attacks in December 2012 and has taken on increasingly sectarian overtones as mainly Christian militias known as anti-Balaka (anti-machete) have taken up arms. Nearly half a million children are among the almost 1 million driven from their homes.

The trucks have been blocked at the border with Cameroon since 6 January, first because there was no custom officer due to the security situation, and then when the drivers refused to proceed because of the ongoing insecurity along the road to Bangui.

Yesterday, a convoy from the African-led International Support Mission to CAR (MISCA) arrived at the frontier to try to help the trucks destined for to Bangui, Ms. Byrs said. As a last resort, WFP had started to work on an alternative, an airlift of 3,000 metric tonnes of food from Douala, Cameroon, but that would substantially increase the cost of the emergency operation in CAR.

In the immediate term, WFP has prioritized distributions at the Bangui airport camp which hosts 100,000 people who have fled the violence. Since 7 January, the agency has distributed two-week rations of cereals, pulses and oil to over 40,000 beneficiaries. A further 25,000 displaced people also received food rations in January in smaller camps across Bangui.

WFP resumed its monthly food distribution to 40,000 beneficiaries in the town of Bossangoa today, and last week provided food to 1,209 people who had returned to the nearby village of Zere.

Meanwhile, clashes at checkpoints along the Beloko-Bangui corridor continued to hamper the movement of trucks, with cereal stocks were running low and close to being exhausted, which could lead to further tension in the overcrowded Bangui airport camp, where levels of tension were extremely high among people displaced by the violence, Ms. Byrs added. 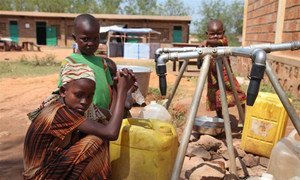 With brutality against children in the Central African Republic (CAR) reaching unprecedented levels as youngsters are maimed, killed and beheaded, and amid rampant sexual violence, the world community must use all the tools at its disposal to stop the conflict, the Security Council was warned today.