As world leaders meet in Montreux, Switzerland, seeking a political solution to the crisis in Syria, the United Nations is calling on all parties in the strife-torn nation to facilitate the urgent provision of humanitarian aid to Palestinians trapped in the Yarmouk refugee camp.

Yarmouk’s 18,000 residents have been besieged for months as the conflict in Syria continues unabated. The UN Relief and Works Agency for Palestine Refugees in the Near East (UNRWA) has been calling for full humanitarian access to the area, which is difficult to enter due to ongoing fighting, making the process of delivering aid “painfully slow.”

“The humanitarian community has continued to attempt to take desperately needed food to thousands of people trapped in Yarmouk, amid reports of children with malnutrition and women dying during childbirth because of a lack of medical services,” said UNRWA spokesman Chris Gunness.

“UNRWA made another attempt to deliver food Tuesday, but after waiting all day was permitted to deliver only 26 food parcels, which means to date, we have delivered just a few hundred food parcels,” he stated.

This is a “drop in the ocean” considering the level of need among Yarmouk’s 18,000 people who have been besieged for months, the spokesman added.

UNRWA is mandated by the UN General Assembly to provide assistance and protection to Palestine refugees. This includes extending relief to civilians in distress in Palestinian refugee camps across Syria.

Mr. Gunness said that UNRWA has managed overall to deliver just a few hundred food parcels. The agency is working with the Syrian authorities, who are facilitating the distribution, to do more to speed up the process so that more substantial quantities of relief can reach the thousands of civilians in Yarmouk to help ease their suffering.

Prior to the armed conflict in Syria, which began in March 2011, Yarmouk – a suburb just south of Damascus – was home to over 160,000 Palestine refugees. In December 2012 and in the months since, conflict has caused at least 140,000 Palestine refugees to flee their homes in Yarmouk, as armed opposition groups established a presence in the area, with Government forces controlling the periphery.

Numerous attempts over the past four months by the UN and other organizations to bring convoys of food and medical aid to malnourished children, women and elderly people close to starvation in Yarmouk have been thwarted.

The UN human rights office (OHCHR) said last week that there have been reports of a number of deaths from starvation, as well as from the consumption of rotten food, and because of the chronic shortage of medical supplies and expertise for sick and injured people and pregnant women trapped in the camp.

The situation is compounded by the lack of electricity and severe shortage of water. Civilians also continue to be killed by ongoing fighting and sporadic aerial attacks, the office had noted.

Mr. Gunness said that UNRWA staff attempting to deliver aid in recent days faced numerous delays, interruptions and obstacles in their efforts, including an extremely time consuming process by military personnel of checking lists of residents, as well as locating distribution points in areas that expose residents to a high degree of risk, including having to cross the front lines to receive assistance.

UNRWA will continue to raise these issues at the highest levels with the Syrian Government, while continuing to deliver aid from the distribution point inside Yarmouk in the coming days, he stated.

♦ Receive daily updates directly in your inbox - Subscribe here to a topic.
♦ Download the UN News app for your iOS or Android devices.
yarmouk|palestin 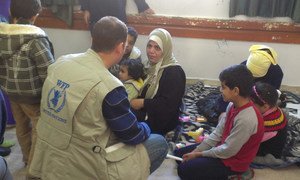