The United Nations agricultural agency today issued a new warning that bird flu viruses are on the rise again in China and urged neighbouring countries to be extra vigilant head of the upcoming Chinese New Year festivities.

“FAO [Food and Agricultural Organization] called upon neighbouring countries to remain vigilant in the face of A(H7N9) and other avian influenza viruses, such as highly pathogenic avian influenza H5N1,” the UN agency said in a news release from Rome.

The number of human infections of H7N9 has considerably increased since late December in East and Southeast China, the UN World Health Organization (WHO) has said. At least seven cases of H7N9 infections have been reported this year, according to local reports.

Addressing its Executive Board today in Geneva, WHO Director-General Margaret Chan stressed that “vigilance is our watchword.”

Millions of people and poultry are expected to be on the move and many households will slaughter poultry at home to celebrate festivities that start next week. In addition, influenza viruses traditionally show increased activity during the winter months.

“But countries need to stay alert, as the virus continues to circulate in poultry without showing any visible clinical signs. The risk to humans remains, especially over the next few months and particularly during the Chinese New Year’s holiday period,” Mr. Lubroth said.

So far, no other country has reported A(H7N9) in humans, animals or in the market place.

FAO is assisting a number of member countries, particularly those that are at high risk, in preventing and preparing for possible introductions of the virus into their poultry populations, conducting risk assessment, contingency planning and expansion of diagnostic capabilities, and risk based surveillance.

The UN agency has also been working with partners, including the United States Agency for International Development (USAID), to implement animal and environmental surveillance at live bird markets and farms since June 2013.

♦ Receive daily updates directly in your inbox - Subscribe here to a topic.
♦ Download the UN News app for your iOS or Android devices.
Avian

Avian flu outbreak leads to culling of over 10,000 birds in Nepal – UN agency 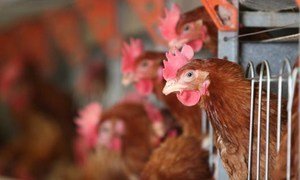 The United Nations food agency has issued a new warning saying bird flu viruses continue to pose a serious threat to human and animal health, adding they will pose a greater risk during the upcoming flu season.