Hoang Dinh Nam
Strong and resilient food systems are the most cost-efficient and sustainable way to prevent all forms of malnutrition.
17 January 2014

“Our common approach to food production is simply not sustainable today, or in 2050, when we will have to provide food for a population of 9.6 billion people,” said FAO Deputy Director-General Helena Semedo in a news release.

“We need to produce nutritious food for all people today while also protecting the capacity of future generations to feed themselves,” she added.

Food production has tripled since 1945 and average food availability per person has risen by 40 per cent, FAO said.

Despite the abundance of food supplies, there are still 840 million people that go hungry every day, according to FAO. The health of another two billion is compromised by nutrient deficiencies.

This, as another 1.5 billion people are overweight or obese, consuming more food than their bodies need and exposing them to greater risk of diabetes, heart problems and other diseases.

Much of the high food output achieved in the past has placed great stress on natural resources, Ms. Semedo said. These include degraded soils, polluted and exhausted fresh water supplies, encroached on forests, depleted wild fish stocks and reduced biodiversity.

Among the challenges highlighted in FAO’s news release is the management of sustainable livestock. Demand for livestock products will grow 70 percent by 2050, the UN agency noted. Consumption of meat, milk and eggs is growing rapidly in developing countries, providing nutritious diets to previously food insecure populations.

“If the global community invested $1.2 billion per year for five years on reducing micronutrient deficiencies, the results would be better health, fewer child deaths and increased future earnings,” she added. “It would generate annual gains worth around $15 billion - a benefit to cost ratio of almost 13 to 1.” 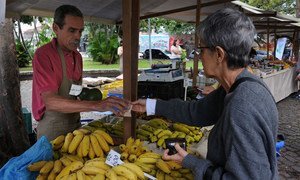 For the second consecutive month, the cost of food worldwide remained nearly unchanged in December, with overall global food prices for 2013 among the highest on record, the United Nations food agency today reported.