With the United Nations development agenda in transition – moving from the Millennium Development Goals (MDGs) era towards a focus not just on poverty eradication but also on the health of the planet – the newly-elected President of the Economic and Social Council (ECOSOC) pledged to continue to strengthen that body’s role as a platform for unified dialogue on sustainable and inclusive development.

With the United Nations development agenda in transition – moving from the Millennium Development Goals (MDGs) era towards a focus not just on poverty eradication but also on the health of the planet – the newly-elected President of the Economic and Social Council (ECOSOC) pledged to continue to strengthen that body’s role as a platform for unified dialogue on sustainable and inclusive development.

“We have a very interesting period ahead of us,” said incoming Council President Martin Sajdik, who is also the Permanent Representative of Austria to the United Nations, briefing the press on ECOSOC’s priorities for 2014, which include tackling sustainability issues as well as rising challenges such as inequality, unemployment and climate change.

“We intend to put the spotlight on the final year left to achieve the MDGs,” Mr. Sajdik said, adding that ECOSOC will play a key part as the international community transitions from the MDGs to Sustainable Development Goals and a UN development agenda post-2015, he noted.

Partnerships are the only way to pursue sustainable development, he said, announcing that he and General Assembly President John Ash will host a two-day thematic debate and dialogue in April on the role of partnerships and their contributions to the post-2015 development agenda.

Highlighting the importance of including the views of young people in the new agenda, Mr. Sajdik said he plans to work with the Secretary-General’s Envoy on Youth, Ahmad Alhindawi, on mobilizing young people to come to the UN. Among his plans is a two-day Youth Forum to be held in June in New York.

Among other issues, he noted the need to strengthen the Council’s role in development cooperation – making sure that the official development assistance (ODA) flows become catalytic for sustainable development.

ODA stands at around 0.31 per cent of national income of developed countries. The target recommended by the UN is 0.7 per cent, according to ECOSOC figures.

The new President noted that this year will be the first time the newly established High-level Political Forum holds a full session.

The Forum, under the auspices of ECOSOC, is to regularly follow-up and implement sustainable development commitments and objectives, including those related to the means of implementation, within the context of the post-2015 development agenda.

Its beginning will coincide with the 2014 Annual Ministerial Review (AMR), to be held in July in New York, whose theme this year is “Addressing on-going and emerging challenges for meeting the Millennium Development Goals in 2015 and for sustaining development gains in the future.”

Earlier in the day, Mr. Sajdik was officially elected and took over the presidency from his predecessor, Ambassador Nestor Osorio of Colombia, whom he credited for lifting the UN body to a “platform for unified dialogue on sustainable and inclusive development.”

Outlining the priority areas on which he also briefed the journalists, Mr. Sajdik stressed that for ECOSOC and the UN overall to make a positive difference in the world, they “must adapt to the rapidly challenging conditions and rise to the level of our Charter mandate.” 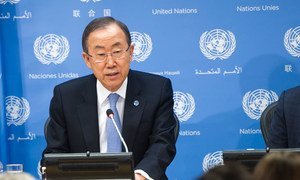 Secretary-General Ban Ki-moon today called on the international community to provide “more political attention, more resources, more support” for the United Nations as it faces “an overflowing inbox of conflicts and disasters of growing severity, frequency and complexity.”