UN Photo/Sylvain Liechti
Peacekeepers serving with the UN Organization Stabilization Mission in the Democratic Republic of the Congo (MONUSCO) on patrol.

14 January 2014
The United Nations today reported a new rebel attack in the eastern Democratic Republic of the Congo (DRC) as the region continues to suffer from deadly violence even after the defeat of a major dissident group, the M23, over a month ago.

In the latest violence, Mayi Mayi Sheka fighters attacked Pinga, in North Kivu province, but left after a 30-minute gun fight with the Congolese Armed Forces (FARDC), the UN peacekeeping force in the DRC (MONUSCO) reported.

Around 1,000 civilians sought refuge during the confrontation near the UN Mission’s base in Pinga, but only 90 remained there today, the others having returned home.

Briefing the Security Council yesterday by video link from Kinshasa, the DRC capital, Secretary-General Ban Ki-moon’s Special Envoy for the Great Lakes Region, Mary Robinson, warned that the positive atmosphere that prevailed last month following the defeat of the M23 rebel group has “vanished” and the region is going through a period of renewed turbulence.

This has been marked by deadly attacks in eastern DRC by another rebel group, the Allied Democratic Forces (ADF), the ongoing crisis in Central African Republic (CAR) and the eruption of fighting in South Sudan.

The Peace, Security and Cooperation Framework for the DRC and the Region, signed by 11 nations last February, remains “the best chance” to achieve sustainable peace, security, cooperation and development in the Great Lakes Region, she said.

In the same briefing Mr. Ban’s Special Representative for DRC Martin Kobler called the Framework a major milestone, along with the creation of an intervention brigade within MONUSCO and the use of unmanned aerial vehicles, which put all armed groups on notice that “we have the will and the means to take robust action at any time.

“In the coming weeks, we will finalize the review of our military deployment across eastern Congo. We will then have a more flexible force. We need it to be more agile, ready to deploy when it is needed and where civilians are threatened, to take on the threat,” he added, also noting that peace in eastern DRC can only be durable if its root causes are addressed.

“Restitution of State authority alone is not enough. Only regional cooperation and good governance will provide the peace dividend the population is expecting.”

Today he strongly condemned the latest attack and sent his condolences to the families of those who lost their lives and the Congolese people, stressing that MONUSCO will continue to work to consolidate the recent military gains.

In March, the Security Council authorized the deployment of an intervention brigade within MONUSCO, based in North Kivu province with a total of 3,069 peacekeepers, to carry out targeted offensive operations, with or without FARDC, against armed groups threatening peace in eastern DRC. 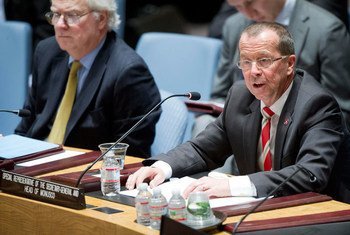 13 January 2014
Efforts to attain peace and stability in the Democratic Republic of the Congo (DRC) are at an important juncture, senior United Nations officials said today, calling on all parties in the region to fulfil their commitments to achieve lasting peace.