13 December 2013
Syrians continue to fall victim to a callous indifference towards human life and disregard for safety, exemplified by the increasing trend of abductions and enforced disappearances, the United Nations human rights chief warned today.

“In just the past few months, we have seen a significant and deeply alarming rise in abductions of human rights defenders, activists, journalists, religious figures and others by armed opposition groups, as well as the continuing arbitrary detention and enforced disappearances of individuals by Government forces in Syria,” High Commissioner for Human Rights Navi Pillay said in a news release.

“I urge all parties to the Syrian conflict to stop terrorizing civilians through abduction, hostage-taking, enforced disappearances and arbitrary detention, in clear violation of international human rights and humanitarian law,” she stressed.

“I call on all parties to the conflict to refrain from targeting civilians and to immediately release all those who are deprived of their liberty in violation of international law.”

The ongoing conflict in Syria, which began in March 2011, has generated grave human rights violations, a massive refugee crisis and humanitarian conditions that are worsening by the day.

In addition to highlighting recent abductions of several journalists and 12 Orthodox nuns, Ms. Pillay drew attention to innumerable civilians, including women and children, who were arbitrarily detained by the Government as far back as 2011 and remain unaccounted for.

“Families of these detainees have in many cases had no word about the whereabouts of their loved ones and do not know if they are dead or alive,” she said. “Some families who reported a disappearance were themselves detained. This kind of terrorising of civilians must stop.”

Meanwhile, the UN Children’s Fund (UNICEF) and its partners today issued a new paper detailing the decline in education for Syrian children – which it called “the sharpest and most rapid in the history of the region.”

According to Education Interrupted, published jointly by UNICEF, the UN High Commissioner for Refugees (UNHCR), World Vision and Save the Children, nearly 3 million children from Syria have been forced to quit their education since 2011 as fighting has destroyed classrooms, left children too terrified to go to school, or seen families flee the country.

“Progress achieved over decades has been reversed in under three years,” said a joint news release about the paper, which is the first attempt to quantify the full extent of the staggering decline in education in a country where primary school attendance rates stood at 97 per cent before the conflict began.

“More than 1,000 days of bloodshed in Syria have seen millions of children lose their education, schools and teachers,” the news release said. “At best, children are getting sporadic education. At worst, they drop out of schools and are forced to work to support their families.”

The paper pointed out that inside Syria, 1 in every 5 schools cannot be used because they have been damaged, destroyed or are sheltering internally displaced persons. In countries hosting Syrian refugees, between 500,000- 600,000 Syrian refugee children are out of school.

The UN and partners noted that Syria was a regional leader in education enrolment before the conflict, yet in less than three years the sharpest regression in education of anywhere in the region has occurred, with dire consequences for the future.

As Syrians face a harsh winter amid civil war for a third year running, the World Food Programme (WFP) has begun distributing close to 10,000 litres of fuel for cooking and heating to internally displaced families living in 10 shelters in Damascus. More distributions are planned for another 35 shelters in the next few days.

“Syria is always quite cold in winter but it is quite different when you face a fierce winter in a shelter with very limited resources rather than in the comfort of your own home,” said WFP Syria Country Director Matthew Hollingworth.

“Most internally displaced Syrians fled their homes with few belongings so they do not even have enough warm clothes or blankets to fend off the freezing weather. They desperately need fuel for heating and to cook the food they receive as humanitarian assistance.”

Over the last few days, WFP has continued to send food to civilians suffering in hard-to-reach areas. It delivered 3,000 family food rations – enough to feed 15,000 people for one month –through two joint inter-agency cross-line missions to Khan Shaykhoon in Idlib Governorate. The area saw intense fighting through all of last year and could not be reached.

Elsewhere, food distributions are underway despite harsh weather, and the agency’s plans to provide food to 4 million people this month across Syria are on track. WFP is also ramping up aid in neighbouring Lebanon and Jordan, two of the countries that are hosting the over 6 million Syrians who have sought refuge from the conflict. 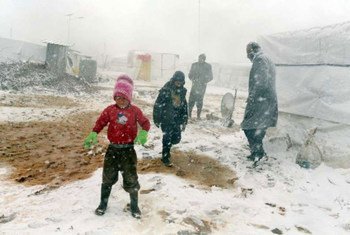 Lebanon: as winter storm bears down, UN and partners ramp up aid for Syrian refugees

12 December 2013
The United Nations and its humanitarian partners are ramping up efforts to assist more than 800,000 Syrian refugees in Lebanon who are facing the onslaught of cold weather, rains and snowfall as a massive winter storm named “Alexa” moves across the region.