UN Photo/Marie Frechon
UN MONUC staff visiting a women's shelter in Goma for victims of sexual abuse. The United Nations marks International Day for the Elimination of Violence Against Women this November 25.
25 November 2013

“Violence against women and girls directly affects individuals while harming our common humanity,” Secretary-General Ban Ki-moon said in his message for the Day, which this year focuses on the theme of raising awareness by wearing the colour orange.

Mr. Ban applauded leaders who are helping to enact and enforce laws and change mindsets, and paid tribute to the heroes who help victims heal and become agents of change. Among those, Dr. Denis Mukwege, founder of the Panzi hospital in the Democratic Republic of the Congo (DRC), who the UN chief met last month, and who in turn, is inspired by the courage of the women he treats.

In her first message for the Day as UN Women Executive Director, Phumzile Mlambo-Ngcuka, urged world leaders to “mount a response that is proportionate to the violence threatening the lives of women and girls.”

“We need education in schools that teaches human rights and mutual respect, and that inspires young people to be leaders for equality,” she said in a video message, adding that to be effective, prevention to must address gender inequality as the root cause of violence.

Wearing orange scarfs uniformly with the other panellists to call attention to the orange theme, she noted that violence takes many forms – physical, psychological, economic and sexual – and that it is more dangerous to be a woman in conflict and post-conflict situations than to be a soldier, given the use of rape as a war tool.

She also called attention to the most common place for violence against women and girls – the home – which is the place they are supposed to be the safest.

Journalists also heard from Sebastiano Cardi, Permanent Representative of Italy to the UN, who noted that while he was the only man on the panel, the issue mainly concerns men since they are traditionally the perpetrators of the violence.

Later today at the UN Headquarters, Italian actors will perform Serena Dandini’s ‘Wounded to Death’, which consists of monologues of women killed by a husband, a partner, a lover or an “ex”.

Ms. Dandini said she wrote the play because she was “upset” at the enormous problem all over the world of violence against women and girls which is “underestimated or considered a folkloristic side effect of country life.”

She said in the briefing that through the theatre, she wanted to raise some messages and create a rise of conscience that would start from the stomach, and travel on to the heart and the brain.

More than 603 million women live in countries where domestic violence is not considered a crime, according to the UN Development Programme (UNDP).

“This is not acceptable: better laws and their enforcement are needed,” said Helen Clark, UNDP Administrator. She called for law enforcement and judicial systems to work together with governments, civil society and international partners to tackle the root causes of violence against women, support victims, and bring perpetrators to justice.

Meanwhile, the UNDP reported today that gender-based discrimination remains the single most widespread driver of inequalities.

According to the ‘Regional Human Development Report (HDR) 2013-2014 Citizen Security with a Human Face: evidence and proposals for Latin America’, gender-based violence contributes to insecurity in Latin America and is a persistent threat and obstacle to human development, public health and human rights.

While the evidence linking gender-based violence and poverty grows, so does a global call to include men’s voices in the solution to violence against women. A recent UN study carried out in the Asia Pacific region found that of the 10,000 men surveyed, nearly half reported using physical and/or sexual violence against a female partner.

The study recommends that development interventions should address social norms related to the acceptability of violence and dominant gender stereotypes, as well as focusing on ending impunity for perpetrators.

This same message is set out in the report ‘A Million Voices: The World We Want’, which synthesizes the results of an unprecedented global consultation involving over a million people across all countries and backgrounds on what the world’s future development agenda should look like.

It states that the current anti-poverty targets known as the Millennium Development Goals (MDG) are silent on violence against women and girls, even though one of the eight goals is on gender, according to the UN agency.

“As we prepare to craft a post-2015 development agenda, violence against women and girls remains an enormous global problem that must be overcome,” said John Ashe, the current President of the General Assembly.

The UN General Assembly designated 25 November as the International Day for the Elimination of Violence against Women in a 1999 resolution inviting governments, international organizations and non-governmental organizations (NGOs) to “organize activities designed to raise public awareness of the problem on that day.”

The date was chosen to coincide with the anniversary of the assassination of three Mirabal sisters, who were political activists in the Dominican Republic, on orders of Dominican ruler Rafael Trujillo on 25 November 1960.

The Day marks the start of 16 days of activism, culminating with Human Rights Day on 10 December.

Given the timing of the 16 days and the focus on raising awareness with the colour orange, this year’s official theme is “Orange the World in 16 Days.”

Today’s events are part of the landmark UNiTE to End Violence against Women campaign. Launched by Mr. Ban in 2008, it has gathered UN agencies and offices to galvanize action across the UN system to prevent and punish violence against women.

He also noted the importance of the UN Trust Fund to End Violence against Women, the world’s leading global grant-making mechanism exclusively dedicated to addressing violence against women and girls, administered by UN Women.

Mr. Ban called for financial support to the Fund, the demand for whose grants have more than doubled in the recent years while the amount it has distributed diminished by 60 per cent.

“I appeal to all partners to help meet this vast unmet demand for resources to further advance efforts to prevent and end violence against women and girls,” he said.

♦ Receive daily updates directly in your inbox - Subscribe here to a topic.
♦ Download the UN News app for your iOS or Android devices.
violence|women 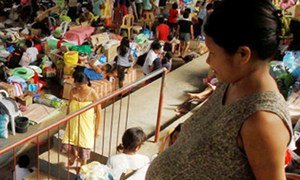 Two weeks after Typhoon Haiyan devastated the Philippines, more than 3.2 million women and girls of reproductive age are still in need of urgent care and protection, the United Nations population agency today said, launching an appeal for $30 million to provide services and aid during the next six months.