UNICEF/Pierre Holtz
In the village of Mélé, Central African Republic, only half of the children in the region go to school because of conflict.

14 November 2013
The United Nations Children’s Fund (UNICEF) has urged the transitional government in the Central African Republic (CAR) to immediately investigate recent allegations of killings of children amid the renewed violence in the country.

“Any allegation of children being killed should be taken very seriously and looked at thoroughly,” Souleymane Diabate, UNICEF Representative in CAR, said in a news release.

“If confirmed, perpetrators must be brought to justice. Since the beginning of the crisis, the population has been desperate for protection. Impunity must end immediately in order to break the vicious cycle of violence.”

A transitional government is in place and entrusted with restoring law and order and paving the way for democratic elections in the country, which is recovering from the violence that erupted last December when the Séléka rebel coalition launched a series of attacks.

However, recent armed clashes and reports of massacres are threatening to further destabilize the nation, which is also facing a dire humanitarian situation that affects some 4.6 million people.

Since September, clashes between local self-defence groups called Anti-Balaka and ex-Séléka forces have triggered large scale displacements of up to 400,000 people, UNICEF said. These attacks have reportedly resulted in the killings of civilians, including children, in north-western CAR, especially Bossangoa, Bouar, Bohong and Yaloke.

With many displaced families still scared to return home, UNICEF teams initially set up two areas in two displacement sites in Bossangoa where up to 600 children can feel safe and protected, play, access recreational and art activities and receive counselling and support.

“UNICEF strongly condemns all acts of violence against children and calls on the transitional government to further investigate these reports and ensure that perpetrators of such acts are identified and brought to justice,” the agency stated.

It also called on the transitional government and all armed forces and armed groups operating in the country to abide by international law, including Security Council resolutions aimed at ending the recruitment and use of children, the killing and maiming of children, and sexual violence against children in situations of armed conflict. 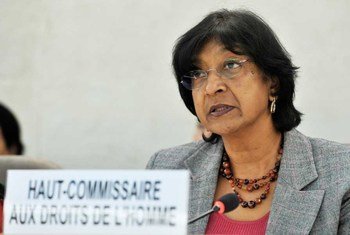 8 November 2013
The top United Nations human rights official warned today that the deteriorating violence in the Central African Republic (CAR) may spin out of control, further destabilizing the country.