Latin America remains the most unequal and most insecure region in the world, the United Nations reported today, calling for inclusive economic growth and enhanced security and justice institutions as the most efficient ways to reduce insecurity.

According to the 2013-2014 Regional Human Development Report (HDR), Citizen Security with a Human Face: evidence and proposals for Latin America, the region experienced both economic growth and increased crime rates over the past decade, with more than 100,000 murders per year during that time.

While homicide rates stabilized and even fell in some of the countries, the perception of security worsened with robberies hiking threefold in the past 25 years.

The report focuses on six main overlapping threats that negatively impact the region: street crime; violence and crime committed by and against youth; gender-based violence; corruption (the misappropriation of public property, whose provision is the responsibility of the state); violence committed by state actors and organized crime.

“While some threats – such as organized crime, especially drug trafficking – are often used to explain insecurity, the regional, national and local dynamics are much more diverse,” explains the lead author, Rafael Fernandez de Castro.

One of the main lessons he drew in the report is that “iron fist” policies do not work: strong police and criminal repression in the region have often coincided with high crime rates.

The assessed experiences confirm that protecting the rights to life, to dignity and to physical integrity is essential to citizen security, which, as a public good, is a responsibility of the state, the report highlights.

Among other findings, the HDR notes that young men are the most affected by crime and violence, and yet are the most common perpetrators.

It also highlights gender violence as a persistent threat and obstacle to human development, public health and human rights in the region.

In addition to the human impact, the insecurity is affecting the region’s economic potential. Without the excess mortality due to homicide, the region’s Gross Domestic Product (GDP) would have been 0.5 per cent higher, equivalent to a potential gain of more than $24 billion in 2009.

♦ Receive daily updates directly in your inbox - Subscribe here to a topic.
♦ Download the UN News app for your iOS or Android devices.
human|development 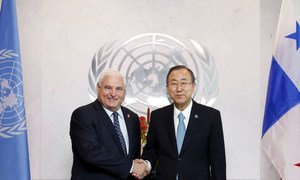 Amidst the 1,000 days of accelerated action to reach the eight anti-poverty targets known as the Millennium Development Goals (MDGs), Secretary-General Ban Ki-moon today met with leaders of two Latin American countries to discuss ways to speed up progress.