courtesy of the Armed Forces of the Philippines
C-130 cargo plane lands in badly affected Tacloban City in the Philippines, in the wake of Typhoon Haiyan.
11 November 2013

In a news briefing in New York, the Director of the Operation Division for the UN Office for the Coordination of Humanitarian Affairs, John Ging, said the funds were released from the Central Emergency Response Fund (CERF) “to enable humanitarian agencies to mobilize their response quickly.”

Haiyan, known locally as Yolanda, is the biggest typhoon recorded in almost a century, and according to OCHA, it has affected nearly 9.8 million people and displaced an estimated 660,000 people. Local officials estimate that some 10,000 people were killed in one city alone, and the overall number is expected to increase as aid workers reach more affected communities.

“The devastation has been huge […] all of our efforts are on mobilizing very quickly and on responding on an equally massive scale,” Mr. Ging said.

UN Emergency Relief Coordinator Valerie Amos is set to arrive to the country tomorrow to launch a flash appeal in Manila, the capital.

“We are very much in support and we are focused, first and foremost, on the requirements for food, shelter support and medical support, to prevent the outbreak of public health disasters,” Mr. Ging said, adding that it is a priority to bury the bodies of those that perished in the deluge. 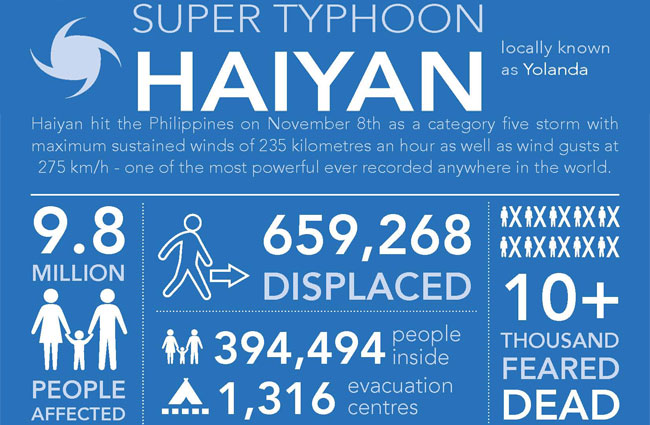 Overcoming logistical constraints is also a challenge due to the damage to infrastructure, roads, and airports. “The scale of devastation also impacts the capacity to get aid to the people where they most need it. Clean drinking water is a very big priority right now,” Mr. Ging said.

In a news release, Ms Amos said: “UN agencies and humanitarian partners are working hard to support the Government and local authorities in their efforts to help people. We have deployed specialist teams, vital logistics support and dispatched critical supplies - but we have to do more and faster.”

According to OCHA, UN agencies and the International Organization for Migration (IOM) will use CERF funding to provide emergency food assistance, supply emergency shelter materials and household items, assist with the provision of emergency health services, safe water supplies and sanitation facilities for the most vulnerable.

The funding will also be used for critical protection, nutrition and emergency activities, camp coordination and management, and logistics to enable a coordinated rapid relief response.

In a telephone conversation with the Foreign Minister of the Philippines this morning, Secretary-General Ban Ki-moon offered his condolences for all those who have suffered as a result of the disaster and re-affirmed the support and solidarity of the UN. 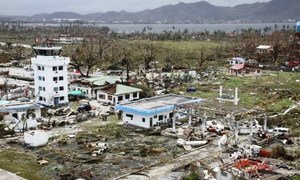 United Nations agencies are working closely with the Government of the Philippines to reach those affected by the super typhoon Haiyan, as the number of reported casualties continues to rise and access remains a challenge in many areas.