UN Photo/UNDP/Noeman Al Sayyad
Gert Danielsen (facing camera), a UN staff member with UNDP, embraces a colleague after his release from captivity in Sana’a, Yemen in 2012.

25 October 2013
In a major new report, United Nations Secretary-General Ban Ki-moon has appealed to Member States and Host Governments to support all measures of safety and security measures to improve the operational environment for UN personnel and humanitarian workers.

“United Nations personnel serve in an increasingly dangerous environment and encounter a variety of threats not previously encountered in the history of the Organization," the UN chief says in a report to the General Assembly, which cites the safety and security of UN personnel as his highest priority.

The report, Safety and security of humanitarian personnel and protection of United Nations personnel, contains an analysis of security incidents that affected UN personnel in 2012, as well as data and observations on incidents in the first six months of 2013.

According to the report, significant security incidents affecting UN staff in 2012 showed an increase from 1,793 compared to 1,759 in 2011. Violent acts are cited as the primary cause of death or injuries last year, with 20 of the 35 deaths attributed to this, while 15 staffers were killed in safety-related incidents.

In 2011, the report continues, 60 per cent of the 70 deaths, as well as the injuries that occurred were the result of a single car bomb attack on the United Nations building in Abuja, Nigeria, on 26 August 2011.

The increasing asymmetrical nature of global conflicts together with the frequent use of Improvised Explosive Devices (IEDs) and suicide bombings in increasingly challenging environments in which UN personnel are obliged to operate, plays a critical role in increasing security threats.

“Direct attacks against the United Nations are a distressing phenomenon that has developed over the last decade and these attacks are becoming more intense and more sophisticated,” says Mr. Ban.

He goes on to cite the attack by extremists on the UN compound in Mogadishu, Somalia this past June, which killed eight people, including a UN Development Programme (UNDP) staff member, and the attack against the International Organization for Migration (IOM) office in Afghanistan. IOM is a member of the United Nations Security Management System.

“The security of the United Nations and humanitarian personnel is firstly, the responsibility of the Host Government,” the Secretary-General says, calling on all Member States to step up efforts to ensure the safety and security of all such personnel are serving on their territories.

In addition to an analysis of security challenges encountered during the reporting period, the report also provides an update on measures and initiatives taken by the Department of Safety and Security (DSS) and the United Nations Security Management System (UNSMS) in continuing efforts to mitigate risks and strengthen security capabilities to protect UN personnel.

Reforms and improvements implemented by the UNSMS have allowed the United Nations to introduce a “sophisticated Security Risk Management system,” and increase the Organization's training for security personnel as well as staff members. Using the Risk Management techniques, the Organisation has been able to adopt the model of “Stay and Deliver” which allows UN field operations to continue to deliver critical services in high risk areas.

Moreover, DSS has beefed up efforts in managing hostage incidents, with the promulgation of a policy on Hostage Incident Management as well as the establishment of a specially trained network of staff who are available for immediate deployment.

Of particular concern to the Secretary-General are locally-recruited staff who “represent the great majority of United Nations personnel serving in the field and suffer the most from insecurity and acts of violence.” He acknowledges the support of the General Assembly to improve the security of local staff, but says that more could be done to ensure their safety and security.

He urges all Member States that have not already done so, “to ratify or accede to the Optional Protocol to the Convention on the Safety of United Nations and Associated Personnel.”

UN rights experts call for transparency in the use of armed drones, citing risks of illegal use 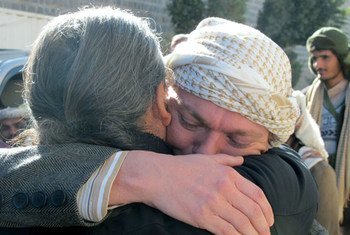 25 March 2013
Secretary-General Ban Ki-moon today urged countries to ensure the protection of thousands of United Nations personnel who risk their lives to help people in need around the world.