10 October 2013
The Security Council today voted unanimously to extend the United Nations peacekeeping mission in Haiti until mid-October 2014 so it can continue contributing to stability and development in the small Caribbean nation.

In his recent report on the UN Stabilization Mission in Haiti (MINUSTAH), Secretary-General Ban Ki-moon said that while challenges remain, the progress made in the stabilization of Haiti since the initial deployment of the mission in 2004 has been “considerable.”

“Given recent achievements and the evolution of the challenges facing Haiti, the ongoing reconfiguration of MINUSTAH should continue. Nine years after its initial deployment, it is worth examining whether a large multidimensional peacekeeping operation is still the most appropriate form of international support to Haiti,” he added.

Today’s resolution decided that MINUSTAH’s overall force levels will consist of up to 5,021 troops and of a police component composed of up to 2,601 personnel. Currently, the mission consists of 6,233 troops and 2,457 police.

Mr. Ban said he intends to engage with the Haitian Government and Member States to explore the best way for the UN to continue contributing to the country’s stability and development. As part of that exercise, the option of replacing MINUSTAH with a “smaller, more focused assistance mission” by 2016 will be explored and proposals on the way forward will be included in his next report to the Council March 2014.

The 15-member Council, in its resolution, affirmed that adjustments to the force configuration should be based on the security situation on the ground, “taking into account the importance of maintaining a secure and stable environment and the impact of social and political realities on Haiti’s stability and security.”

It also reiterated that building the capacity of the Haitian National Police remains “a most critical task” for MINUSTAH, and requested the mission to continue efforts to strengthen the institutional and operational capacities of the police.

In addition, the Council urged Haiti’s political actors to “work cooperatively” to complete all steps, including an electoral law, required to prepare for and hold long overdue free, fair and transparent senatorial, municipal and local elections in accordance with the Constitution to ensure the continued functioning of the National Assembly and other elected bodies.

Briefing the Council in August, the Secretary-General’s Special Representative and head of MINUSTAH, Sandra Honoré, warned that the ongoing electoral stalemate, linked to socio-economic grievances, poses “a series of risks to the stabilization process.”

Ahead of 2014 draw down, Security Council extends assistance force in Afghanistan 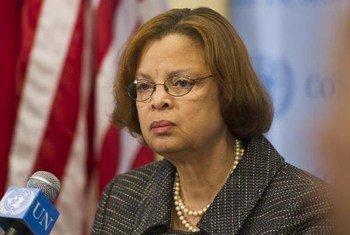 28 August 2013
The ongoing electoral stalemate in Haiti, already linked to socio-economic grievances, could undermine the political and security situations, the new head of the United Nations peacekeeping mission in the country said in her first briefing to the Security Council.