A joint team of United Nations and international inspectors today began to oversee the process of dismantling and destroying Syria's chemical weapons production programme, it was announced.

The team oversaw Syrian personnel who used cutting torches and angle grinders to destroy or disable a range of items, including “missile warheads, aerial bombs and mixing and filling equipment,” the Organisation for the Prohibition of Chemical Weapons (OPCW) said in a press release.

International inspectors from the OPCW supported by a team from the UN are monitoring, verifying and reporting on Syria's compliance with international demands to destroy chemical weapons stockpiles and production facilities.

The Security Council unanimously adopted a resolution in September calling for the speedy implementation of procedures drawn up by the OPCW “for the expeditious destruction of the Syrian Arab Republic's chemical weapons programme and stringent verification thereof.”

In the text, the 15-member Council underscored “that no party in Syria should use, develop, produce, acquire, stockpile, retain, or transfer chemical weapons.”

OPCW and the UN have said that in discussion with authorities, the team stressed “that the onus was on the Syrian Government to meet the verification and distribution deadlines” with technical support from the joint mission to meet those obligations.

The destruction process will continue in the coming days, OPCW said.

Its director, Ahmet Üzümcü, is due to brief the organization's member states on Tuesday, the same day he will address the OPCW Executive Council. 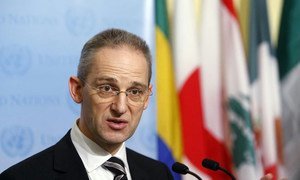 Syria: joint UN team preparing for onsite inspections ‘within the next week’

The Organisation for the Prohibition of Chemical Weapons (OPCW) is reviewing additional information received from Syria in connection to its chemical weapons stockpiles, a United Nations spokesperson said today, ahead of onsite inspections and initial disabling of equipment which could start as early as next week.