Voicing deep concern at tightened restrictions on the right of assembly in Azerbaijan and the harassment of journalists, three independent United Nations experts today called on the Government to facilitate the work of human rights defenders and civil society organizations in the run up to next Wednesday’s presidential elections.

“We have observed since 2011 a worrying trend of legislation which has narrowed considerably the space in which civil society and defenders operate in Azerbaijan,” they said in a joint news release in Geneva. “We are very concerned about the challenging and restrictive environment which defenders and civil society currently face in the country.”

The UN Special Rapporteur on the rights to freedom of association and peaceful assembly, Maina Kiai, stressed that all demonstrations complying with international human rights standards should be allowed and peaceful gatherings should not face the use of excessive force and administrative detention against demonstrators, even if such assemblies are not authorized.

“In times of elections, States should make greater efforts to facilitate and protect the exercise of the core rights to freedom of peaceful assembly and association,” he said. “Amendments to the law on Freedom of Assembly adopted in 2012 have tightened the existing restrictions to the right to assemble peacefully, including by increasing penalties for those organizing rallies.”

The UN Special Rapporteur on freedom of opinion and expression, Frank La Rue, expressed particular alarm about cases of intimidation and harassment of journalists, including by unwarranted judicial proceedings, and urged the Government to consider the implementation of its 2012 National Action Plan commitment to decriminalize defamation.

“The mere threat of arrest or of excessive damages claims in civil defamation cases has a chilling effect on the right to freedom of expression in a society,” he said. “I am also concerned about a recent amendment to relevant legislation extending defamation provisions to online expression.”

The special rapporteurs, who serve in an unpaid capacity, are appointed by and report to the Geneva-based UN Human Rights Council, warned that recent changes to the 2013 law on grants could seriously deter the work of human rights organizations by imposing unreasonable fines and liability on organizations for operating outside formal grant agreements and not notifying the receipt of grants within the established period.

They said, however, that they appreciated the engagement of the authorities when they have raised these issues over the past few months, and reiterated their availability to provide further assistance and technical advice on legislation and other measures affecting the work of civil society and right defenders in the country.

UN food aid for 130,000 Azerbaijanis faces shut down due to funding shortfall 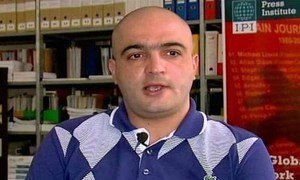 An Azerbaijani journalist and human rights activist has been named this year’s winner of the annual United Nations prize that honours those promoting freedom of expression.