The International Criminal Court (ICC) has issued an arrest warrant for a man accused of bribing a prosecution witness in the case against Kenyan Deputy President William Ruto.

A statement from the Court’s Prosecutor said that evidence collected so far indicates that there is a “network” of people who are trying to “sabotage” the case against Mr. Ruto – one of four prominent Kenyans accused of crimes against humanity and other offences allegedly committed following general elections in late 2007 – by interfering with prosecution witnesses.

“Walter Barasa, against whom compelling evidence has been collected, has been part of this network, and his actions fit into this wider scheme that the Office continues to investigate,” said Fatou Bensouda.

“We expect Kenyan authorities to arrest Walter Barasa and hand him over to the Court. He will appear before ICC judges on charges of corruptly influencing and attempting to corruptly influence a person he believed to be a prosecution witnesses.”

Under Article 70 of the Rome Statute, which established the ICC, using bribes or threats to influence witnesses to change or recant their testimony is a crime. If found guilty, Mr. Barasa – who is reportedly a journalist – faces up to five years in prison, a fine, or both.

Ms. Bensouda added that the issuance of an arrest warrant in this case should be a warning to others who may be involved in obstructing the course of justice through intimidating, harassing, bribing or attempting to bribe ICC witnesses.

“My Office will continue to do everything it can to ensure that witnesses are able to present their evidence before the Court without fear,” she stated. “Witnesses who have courage to come forward to testify deserve no less.” 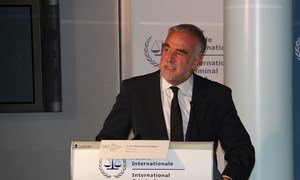