UNHCR/Jean-Marc Ferré
The formal opening of the 64th annual session of UNHCR's Executive Committee in Geneva.

1 October 2013
Participants at a United Nations meeting in Geneva today agreed on urgent action to mitigate the economic and social impacts of the humanitarian crisis spawned by the Syrian conflict on neighbouring countries struggling under the weight of more than two million Syrian refugees.

Participants at a United Nations meeting in Geneva today agreed on urgent action to mitigate the economic and social impacts of the humanitarian crisis spawned by the Syrian conflict on neighbouring countries struggling under the weight of more than two million Syrian refugees.

In a joint statement, members of the Executive Committee of the UN High Commissioner for Refugees (UNHCR) called for massive support to enable Iraq, Jordan, Lebanon, Turkey, and Egypt to continue hosting Syrian refugees.

This includes direct aid to governments; financial and in-kind help to refugee populations and the communities hosting them; assistance for economies, societies, services, infrastructure, environment and security; enhanced resettlement, humanitarian admissions and family reunification possibilities for Syrian refugees in third countries; and development initiatives and projects to help host communities to ease the economic and social costs of hosting refugees.

High Commissioner António Guterres welcomed pledges by a number of countries for resettlement or humanitarian admission of over 10,000 highly vulnerable Syrian refugees. He also called on all countries, particularly in Europe and in the extended Middle East, to allow access to asylum and to introduce more generous resettlement schemes.

Along with sending over two million people fleeing to neighbouring countries, the conflict in Syria, which began in March 2011, has led to more than 100,000 deaths and displaced 4.2 million people inside the country.

Muhannad Hadi, the World Food Programme’s (WFP) Emergency Regional Coordinator for Syria, told reporters in Geneva today that the agency is concerned with the ever-increasing number of displaced people and the fact that all sectors of the economy are collapsing.

People who may have had income cannot purchase food due to high inflation, he noted. Syria had also experienced the worst harvest in years. Of particular concern are Syrian women who cannot be not be reached by WFP delivery convoys, and who are unable to feed their children.

Despite all of the increasing challenges, WFP is expanding its operations and is hoping to reach three million people in October, and as many as four million in November, said Mr. Hadi.

Also today, it was announced that a team from the UN and the Organisation for the Prohibition of Chemical Weapons (OPCW) has arrived in Damascus, just four days after the OPCW Executive Council and the UN Security Council unanimously endorsed a plan to send them to Syria to begin the process of overseeing the destruction of the country’s chemical weapons.

“On arrival, the team established a logistics base for its immediate work. In the coming days, their efforts are expected to focus on verifying information provided by the Syrian authorities and the initial planning phase of helping the country eliminate its chemical weapons production facilities,” said Mr. Nesirky.

According to the deadline set by the UN and the OPCW, the entire chemical weapons stockpile must be eliminated in the first half of next year.

Yesterday, Secretary-General Ban Ki-moon voiced the hope that the successful initiative on chemical weapons that led to a Security Council resolution last week would help create momentum that could lead both to increased humanitarian access and to a political solution for Syria. In a meeting with Nabil Elaraby, Secretary-General of the League of Arab States, Mr. Ban also discussed arrangements for a peace conference on Syria. 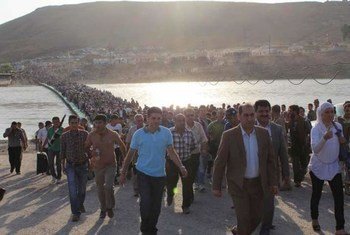 30 September 2013
The United Nations refugee chief today called on Syria’s neighbours to continue to keep their borders open and provide protection to those fleeing the conflict, and on the international community to help these countries shoulder the burden.