26 September 2013
As the United Nations prepares to set a long-term development agenda for the decades following the end of the current Millennium Development Goals (MDGs) cycle, it must address the “skewed” income gap favouring rich countries, Guyana warned today.

As the United Nations prepares to set a long-term development agenda for the decades following the end of the current Millennium Development Goals (MDGs) cycle, it must address the “skewed” income gap favouring rich countries, Guyana warned today.

“If there is one lesson to be drawn from efforts to achieve the MDGs, it is that addressing inequality is crucial to the achievement of sustainable development objectives,” Guyanese President Donald R. Ramotar told the General Assembly on the third day of its annual General Debate.

“Income distribution continues to be skewed in favour of the rich nations and rich persons within countries. This gap has grown dangerously wider. Needless to say, inequality leads to great discontentment and social unrest. At the heart of many of the conflicts we see today is the widening gap between the haves and have nots.”

The theme of this year’s 68th General Assembly is “The Post 2015 Development Agenda: Setting the Stage!” aims at drawing up an even more ambitious blueprint to totally eliminate poverty and its attendant ills in the decades following the end in 2015 of the MDGs cycle.

The eight Goals, adopted at a 2000 UN summit, aim to slash extreme hunger and poverty, boost access to health care and education, achieve gender equality and environmental stability, reduce maternal and child mortality and the incidence of HIV/AIDS, all by the end of 2015.

Mr. Ramotar noted that despite substantial progress towards achieving the MDGs, there were many shortcomings. “Health and education challenges threaten the sustainability of hard earned

“Today, still more than one billion people live in extreme poverty and one in eight persons on the planet suffer from chronic undernourishment, among them more than 200 million children. In addition, we still have 57 million children who are out of school. This needs to be urgently corrected.”

He highlighted the role the UN must play in ensuring that poorer, smaller developing countries are not always put at a disadvantage at the level of international economic discourse and action.

“In setting the agenda for the post-2015 Development Agenda, we believe that we should continue the pursuit of eradicating poverty. The United Nations must not allow this objective to be lost among the many other demands that exist.”

Inclusion must be ‘front and centre’ in post-2015 agenda, Mexican Foreign Minister says 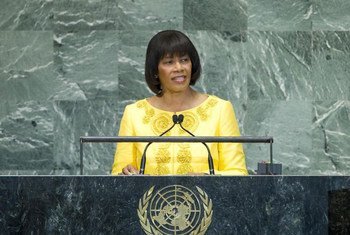 27 September 2012
Jamaica’s Prime Minister Portia Simpson-Miller spoke up for middle-income states before the United Nations General Assembly today, calling on the international community not to forget them in aid for development and the fight against disease.