25 September 2013
Progress has been made in the Democratic Republic of the Congo (DRC) in putting in place a legal regime to combat impunity for human rights violations, but the rights situation in the east of the country continues to deteriorate, according to a new United Nations report presented to the press in Kinshasa today.

The report, the latest on the rights situation in the country by UN High Commissioner for Human Rights Navi Pillay, welcomes the enactment of a law establishing a national human rights commission as well as the institution of proceedings against State agents accused of human rights violations.

However, it also deplores the “significant deterioration” of the human rights situation in the east of the country, despite the Government’s efforts, with the majority of violations being committed by security and defence forces as well as by combatants of the 23 March Movement (M23) and other armed groups.

“It is essential to establish reliable vetting mechanisms to ensure that human rights abusers are not maintained within or integrated into the security forces,” Scott Campbell, director of the UN Joint Human Rights Office in the DRC, told reporters.

Martin Kobler, the Secretary-General’s Special Representative and head of the UN peacekeeping mission in the DRC (MONUSCO), added at the press conference that “a true stabilization of the country and the effective protection of human rights are two directly related imperatives.

“By uniting the efforts of the UN with those of the Government of the DRC, we are confident that we can make significant progress in the fight against impunity and the protection of civilians.”

Underscoring the deterioration of conditions in the east, meanwhile, Mr. Kobler also issued separately today a condemnation of attacks on schools and hospitals by parties to the conflict there, naming in particular actions of the armed group known as the Allied Democratic Forces (ADF) in Beni territory.

Following a joint investigation by UN and local authorities, it was found that ADF elements ransacked 11 primary schools and five health centres in July 2013, destroying furniture and looting equipment. Four more health centres and a school were attacked in previous months.

“ADF and all other parties involved in such acts must immediately stop committing these deplorable violations of the rights of the child, which have deprived more than 7,000 children of their education and affected the provision of health services for thousands more,” Mr. Kobler said. 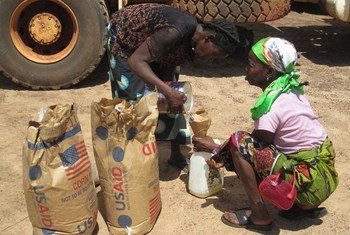 80,000 people displaced by fresh fighting in DR Congo over past month

18 September 2013
Some 80,000 people have been driven from their homes in a new outbreak of violence in the eastern Democratic Republic of the Congo (DRC) over the past month following repeated clashes between the national army and rebels, the United Nations reported today.