24 September 2013
Switzerland today expressed concern that in a return to “power politics”, larger States are once again choosing to exercise their power and strength, and reaffirmed that sovereignty and equal rights are the convictions upon which the UN Charter is based.

“I sincerely hope that this trend will be corrected.” the Swiss President, Ueli Maurer, told the 68th session of the General Assembly. “No country imposes its law over that of another country. Problems are not solved by diktat, but through negotiation.”

The President spoke on the opening day of the General Debate, making the point that humanitarian efforts were part of his country’s history and it was an honour for Switzerland to make its neutral soil available for peace talks.

He reminded delegations that it was 150 years ago that the world renowned humanitarian organization, the International Committee of the Red Cross (ICRC) was created in Geneva, and both Switzerland and the ICRC shared a tradition of neutrality and humanitarian action.

In his address, Mr. Maurer appealed to the Security Council’s permanent members to overcome their differences to “find some common ground.” He reiterated the need for no effort to be spared for a consensus to be reached to allow for a political solution and the resumption of talks in Geneva.

Separate from bilateral talks between Russia and the United States on a framework for the safeguarding and destruction of Syria's chemical weapons stockpiles, the United Nations-Arab League Joint Representative Lakhdar Brahimi has pressed on with efforts towards the holding of a long-proposed international peace conference on Syria, commonly referred to as “Geneva II”, after the Swiss city in which it would be held.

Mr. Maurer also said global problems need global solutions and the UN should be where that happens. But in order to live up to that role, the UN must be “efficient, innovative and effective,” he added.

Acknowledging that the UN is active in a vast range of areas, the President went on to say, “There is perhaps a risk that it has taken on too much and lost focus.”

According to a readout issued by a spokesman for Secretary-General Ban Ki-moon, the UN chief met today with Mr. Maurer. During the meeting, they discussed the situation in Syria. They also exchanged views on disarmament and on prospects for a concrete outcome from the upcoming High-Level Dialogue on Migration and Development.

Mr. Maurer joins a score of other world leaders and high-level officials taking part in the General Debate, which concludes on 1 October. The delegations will present their views and comments on issues of individual national and international relevance. 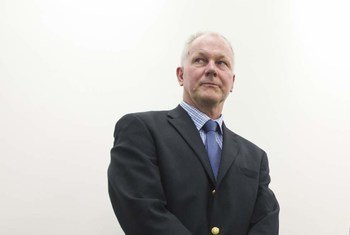 24 September 2013
The United Nations team probing the possible use of chemical weapons in Syria will return to the country on Wednesday to complete its investigation of pending credible allegations, including the 19 March incident at Khan al-Asal, a spokesperson for the world body said today.