24 September 2013
Citing his efforts to ensure that economic growth benefits all segments of society in his own country, Sri Lankan President Mahinda Rajapaksa today called on the United Nations to study the international community’s failure to improve the lot of the impoverished worldwide.

Citing his efforts to ensure that economic growth benefits all segments of society in his own country, Sri Lankan President Mahinda Rajapaksa today called on the United Nations to study the international community’s failure to improve the lot of the impoverished worldwide.

“According to World Bank projections, by 2015, Sub-Saharan Africa and Southern Asia will be home to approximately 40 per cent of the developing world's population living in extreme poverty,” he told the General Assembly on the first day of its annual General Debate, noting that commitment to the Millennium Development Goals (MDGs) had brought a real sense of hope.

“[Yet these projections] only diminish the sense of our optimism. It is fitting for the UN system to examine the causes for the failure in improving the lot of the deprived,” he said.

The year 2015 is the target date for achieving the MDGs, which seek to slash extreme hunger and poverty, boost access to health care and education, achieve gender equality and environmental stability, and reduce maternal and child mortality and the incidence of HIV/AIDS.

“Reflecting on the work of the UN, matters of a political nature have overridden the most basic issues, which affect the underprivileged and marginalized, who dominate world society,” Mr. Rajapaksa said, noting that while appreciable progress has been made on the MDGs, the results have been uneven among and within countries.

With regard to Sri Lanka, he said his vision has been to distribute the benefits of growth across all segments of the population and prevent inequalities, social exclusion and adverse environmental effects.

He stressed that the post-2015 development agenda, the theme of this year’s 68th General Assembly, must have poverty eradication and accelerated growth in the developing world as its primary goals, but he pointed to the uneven playing field between developed and developing countries with regard to global warming gas emissions.

“Centuries of growth in advanced economies have left little carbon space for the developing world, challenging their growth,” he said. “The thin lines of balancing economic development and protection of the environment will remain a great challenge in future development policy-setting. “It is therefore critical that developed countries honour their commitments and compensate damage to the environment, on the basis of common but differentiated responsibilities.”

On other issues, Mr. Rajapaksa called for reform of international monetary and financial institutions to express the solid voice of the developing world, decried interference by some in the internal affairs of developing countries, called for a two-state solution to the Israeli-Palestinian conflict, and condemned the United States embargo against Cuba.

Meeting earlier with UN Secretary-General Ban Ki-moon, Mr. Rajapaksa exchanged views on the post-conflict situation in Sri Lanka and the country’s cooperation with the UN.

According to a readout of the meeting, the Secretary-General noted the Government’s latest efforts to conduct the provincial elections and to implement the recommendations of its Lessons Learnt and Reconciliation Commission. Mr. Ban also addressed the remaining challenges in reconciliation and emphasized the need for a more holistic approach. 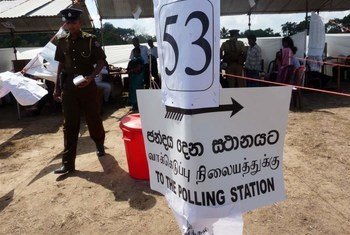 19 September 2013
The forthcoming provincial elections in Sri Lanka are an important opportunity for reconciliation in the country, Secretary-General Ban Ki-moon said today, calling on all parties to take part in the electoral process in a peaceful manner.