A locust control campaign has been launched by the United Nations and the Government of Madagascar to treat over 2 million hectares of infested areas in a bid to avert a food crisis that could affect some 13 million people in the island nation.

“Of the 13 million people at risk, 9 million are directly dependent on agriculture for food and income,” said the Food and Agriculture Organization (FAO) Representative in Madagascar, Patrice Talla. “The locust campaign is vitally important to try to limit any further damage to poor farmers’ crops.”

Aerial operations to identify and map out the areas requiring treatment by pesticides are expected to get underway this week, FAO said in a news release. In the meantime, ground surveys, conducted on a monthly basis since February, continue. Procurement of pesticides, vehicles and equipment for survey and control operations is also in progress. Spraying operations are expected to start in late October, after the onset of the rainy season.

The locust plague in Madagascar started in April 2012, damaging large areas of cropped land and pastures. Although the locusts have mainly hit the south of the country, in late 2013/early 2014 some insects are expected to reach the more productive northern regions.

An assessment mission carried out by FAO earlier this year found that rice and maize losses due to the locusts in some parts of the country vary from 40 to 70 per cent of the crop, with 100 per cent losses on certain plots. The agency estimates that losses in rice production could be up to 630,000 tonnes, or about 25 per cent of total demand for rice in Madagascar. Rice is the main staple in the country, where 80 per cent of the population lives on less than a dollar per day.

This is the first of three successive locust control campaigns that will take place between September 2013 and September 2016 as indicated in a three-year programme, jointly prepared by FAO and the Madagascar ministry of agriculture.

So far, FAO has raised $23 million towards the programme, which will cost $41.5 million over three years. Negotiations for further funding are at an advanced stage although millions of dollars are still needed to complete the full programme.

The programme includes: improving the monitoring and analysis of the locust situation; large-scale aerial and ground spraying and related training; monitoring and mitigating the effect of control operations on health and the environment; and measuring the impact of anti-locust campaigns and the damages to crops and pasture.

“Prevention is much better than cure in locust control,” said Ren Wang, FAO Assistant Director-General for Agriculture and Consumer Protection. “We have enough funding to start the first year’s campaign and try to bring the locust plague under control so it doesn’t last years and cost hundreds of millions of dollars. But we need more funds over the next three years to finish the job.” 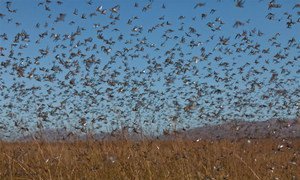 The United Nations Food and Agriculture Organization (FAO) today urgently appealed for $22 million to tackle the locust plague that has already infested over half of Madagascar’s cultivated land and pastures and threatens to trigger a severe food crisis in the island nation.