Mr. Ban said South-South cooperation was particularly important as the world approached the 2015 deadline of the eight anti-poverty targets known as the Millennium Development Goals (MDGs). Agreed upon by world leaders at a UN summit in 2000, the MDGs set specific targets on poverty alleviation, education, gender equality, child and maternal health, environmental stability, HIV/AIDS and malaria reduction, and a global partnership for development.

“In many developing countries incomes are up, poverty is declining and hope is rising,” he said in his remarks delivered by the Associate Administrator of the UN Development Programme (UNDP), Rebecca Grynspan.

Mr. Ban pointed out significant progress such as the achievement of the goal to cut extreme poverty by half, increasing access to education for girls and boys, and significantly reducing infant mortality. More than 2 billion people also gained access to drinking water.

“These and other economic achievements of the global South have given rise to a rapidly expanding middle class adding a strong voice to demands for more liberties, equity, decent jobs and a wide range of goods and services that are critical to genuine human progress,” he said.

In spite of positive trends, Mr. Ban noted that there are still 1.2 billion people living in conditions of extreme poverty, and stressed the importance of defining a post-2015 agenda that will galvanize development efforts in the years and decades ahead.

“As that agenda takes shape, the international community is already united around the idea that South-South cooperation should remain an integral part of the global partnership for development,” he said. “Developing countries are turning to each other for lessons on innovative policies and schemes to address pressing development challenges.”

He pointed to examples of cooperation between Brazil and Africa, as well as India and China, which have helped tackle issues such as childhood nutrition, agriculture, and the development of new infrastructure.

“More solutions are available across the global South which, if adequately harnessed, could make meaningful contributions across a range of urgent concerns, from hunger and health to education and sustainable energy,” Mr. Ban said, and called on partners to “redouble their efforts to harness the wealth of knowledge, expertise and development thinking in the Global South.” 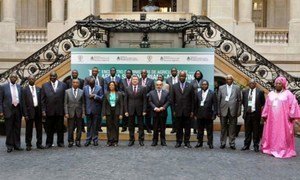 A senior United Nations official has stressed the importance of South-South cooperation to advance agricultural development in developing countries, adding that this collaboration can also help end hunger in the African continent.