Various measures implemented in recent years by the British Government are eroding the right to affordable housing in the United Kingdom, a United Nations independent expert said today.

“For generations, being poor in the UK didn’t necessarily equate to being homeless, or to living badly housed and in permanent threat of eviction,” said the Special Rapporteur on housing, Raquel Rolnik, at the end of her first visit to the country.

Unfortunately, said Ms. Rolnik, “the system has been weakened by a series of measures over the years, notably by having privileged homeownership over other forms of tenure.”

Most recently, several reforms to the welfare system along with cuts in housing grants “appear to compromise the realization of the right to adequate housing and other related human rights,” she said.

In particular, Ms. Rolnik pointed to the ‘bedroom tax’ as a measure that has negatively affected many vulnerable citizens. The policy, introduced by the Government in April, charges tenants extra for under-occupying homes that are supposedly too large for them.

“The so-called bedroom tax has already had impacts on some of the most vulnerable members of society,” Ms. Rolnik said. “During these days of my visit, the dramatic testimonies of people with disabilities, grandmothers who are carers for their families, and others affected by this policy, clearly point to a measure that appears to have been taken without the human component in mind.”

While acknowledging that difficult economic times allow for difficult policy decisions, Ms. Rolnik underlined that this does not justify putting housing rights in jeopardy.

The Special Rapporteur also expressed concerned over the conditions of private renters, as the reduction in the social housing stock and the credit downturn has forced a higher percentage of the population, notably young people, to the private sector.

“Although there are significant differences between the situation and policy decision-making in England, Scotland, Northern Ireland and Wales, to which I will refer in my final report in more detail, my perception is that some trends are common and deserve further scrutiny from a human rights perspective”, she said.

Independent experts or special rapporteurs are appointed by the Human Rights Council to examine and report back, in an unpaid capacity, on specific human rights themes. Ms. Rolnik will present her report to the Council in March 2014. 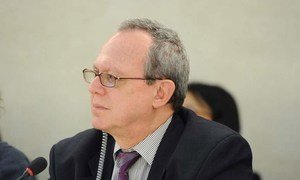