A common motivation of men who have admitted to rape is the belief that they are entitled to sex even without the female partner’s consent, according to a newly released United Nations study of some Asia and Pacific countries, which urges greater measures to end impunity for men who use violence against women and girls.

According to the survey of 10,000 men at nine sites, nearly half reported using physical and or sexual violence against a female partner, and nearly a quarter admitted to having raped.

“The study’s findings reaffirm that violence against women is an expression of women’s subordination and inequality in the private and public spheres,” according to a joint news release by a coalition of the survey’s authors: UN Development Programme (UNDP), UN Population Fund (UNFPA), UN Women and United Nations Volunteers (UNV).

The findings show how men’s use of violence against women is associated with men’s personal histories and practices, within a broader context of structural inequalities.

According to the men surveyed, rape was particularly common within relationships, but one in 10 men admitted to raping a woman who was not their partner.

Half of those who admitted to rape reported their first time was when they were teenagers. Some 23 per cent of the men who had admitted to rape in Papua New Guinea and 16 per cent in Cambodia were 14 years or younger when they first perpetrated rape.

In addition, four per cent of the people asked said they had perpetrated gang rape against a woman or girl.

Of the men who had committed rape, 72 to 97 per cent were never punished, “confirming that impunity remains a serious issue in the region,” according to the survey in nine sites across Bangladesh, Cambodia, China, Indonesia, Papua New Guinea and Sri Lanka. 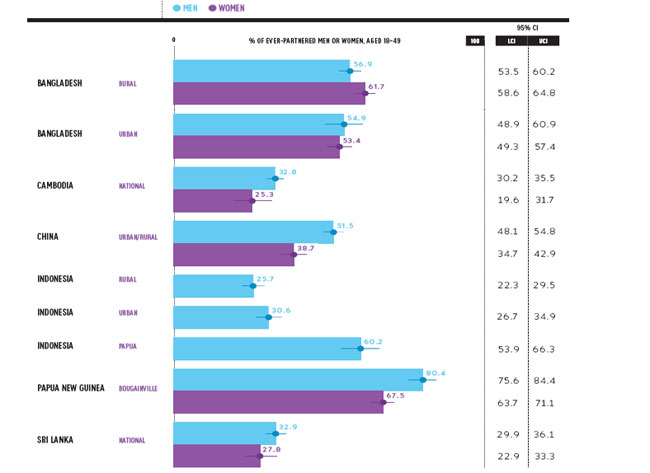 The authors stressed that the study was conducted in nine sites in six countries and the data is representative of those sites, but not of the whole Asia-Pacific region nor the entire individual countries.

Among the factors common to men who perpetrated violence against women, the authors found that the men were more likely to have experienced physical, sexual or emotional abuse as a child ranging from being publically humiliated or insulted to sexually abused, or witnessed the abuse of their mother.

Although not as prevalent as women’s experience of rape, some men reported also being rape by other men as adults.

Although these factors are not meant to excuse men from their actions, the authors wrote, they provide a historical and societal contexts that also contributed to violence against women.

“While violence against women cuts across all socio-economic groups and sites, the study suggests that the sue of violence may increase among men who have less power compared to other men and who experience social stresses such as those caused by substance abuse or by poverty,” the authors wrote, adding that violence against women is used possibly as a way to reassert some level of power or control.

To prevent such violence, the study recommends changing social norms related to the acceptability of violence and subordination of women through community mobilization programmes and engagement with people who influence culture.

Other recommendations include promoting non-violent and caring ways to be a man, for example through sustained school-based or sports-based education programmes, as well as working with young people, with a particular focus on boys and adolescents, to understand consent, and healthy sexuality, and to foster respectful relationships.

Part of the UN research has also been published in The Lancet Global Health.

An independent United Nations human rights expert has stressed the need to hold States accountable not only for investigating acts of violence against women but also for failing to prevent such violence.