Syria: samples collected at site of alleged chemical weapons use to reach labs ‘within hours’

OPCW/Henry Arvidsson
Ake Sellström (left), head of the UN Inspection Team to Syria, is greeted by OPCW Director-General Ahmet Üzümcü upon the team's return to The Hague on 31 August 2013.
2 September 2013

Samples collected by the United Nations chemical weapons inspection team in Syria are now being transferred from The Hague to laboratories for analysis, according to a spokesperson for Secretary-General Ban Ki-moon.

“Since the return of the Mission last Saturday, the UN team worked around the clock to finalise the preparations of the samples in view of their shipment to the designated laboratories,” the spokesperson said in a note to correspondents.

“The samples were shipped this afternoon from The Hague and will reach their destination within hours,” the note continued.

It added that the designated laboratories are prepared to begin the analyses “immediately after receipt of samples.”

The spokesperson had said that the analyses would be conducted in laboratories in Europe “strictly adhering to the highest established standards of verification recognized by the Organization for the Prohibition of Chemical Weapons [OPCW].”

Once completed, a report will be given to Mr. Ban who will share the results with the 193-Member States, and the 15-member Security Council.

Mr. Ban has remained in close contact with the five permanent members - China, France, Russia, the United Kingdom and the United States, according to his spokesperson.

He is due to brief the 10 non-permanent members of the Security Council on the latest developments tomorrow morning.

Also tomorrow, High Representative for Disarmament Affairs Angela Kane will brief Member States that had written to Mr. Ban requesting the investigation of the alleged use of chemical weapons in Ghouta area of Damascus on 21 August.

The site was inspected by the team, led by Swedish scientist Dr. Åke Sellström, who spoke by telephone yesterday with Mr. Ban.

At the time, Mr. Ban asked Mr. Sellström to expedite the mission's analysis of the samples and information it had obtained without jeopardizing the scientific timelines required for accurate analysis, and to report the results to him as soon as possible. 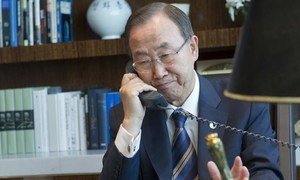 Syria: samples collected at site of alleged chemical weapons use to be sent to labs tomorrow

Samples collected by the United Nations chemical weapons inspection team in Syria will begin to be transferred to laboratories tomorrow, according to a spokesperson for Secretary-General Ban Ki-moon.