Syria: samples collected at site of alleged chemical weapons use to be sent to labs tomorrow

Samples collected by the United Nations chemical weapons inspection team in Syria will begin to be transferred to laboratories tomorrow, according to a spokesperson for Secretary-General Ban Ki-moon.

“The whole process will be done strictly adhering to the highest established standards of verification recognized by the Organization for the Prohibition of Chemical Weapons [OPCW],” spokesperson Martin Nesirky told reporters in New York following a telephone call between Mr. Ban and Dr. Åke Sellström, the head of the inspection team.

Mr. Ban asked Mr. Sellström to expedite the mission's analysis of the samples and information it had obtained “without jeopardizing the scientific timelines required for accurate analysis and to report the results to him as soon as possible,” Mr. Nesirky said, adding that they had discussed ways to further accelerate the analysis.

He reiterated that the UN mission is “uniquely capable of establishing, in an impartial and credible manner, the facts of any use of chemical weapons based directly on evidence collected on the ground.”

Two Syrian Government officials have been observing the process, as per Mr. Ban's guidelines for the procedure, and in strictly in adherence with the established standards for verification set up by the OPCW.

Once analysis of the samples is completed, a report will be given to Mr. Ban who will share the results with all Member States, and the Security Council.

Mr. Ban has been in close contact with the five permanent members - China, France, Russia, the United Kingdom and the United States. He spoke earlier today with the Foreign Minister of France, Laurent Fabius.

Mr. Ban is due to brief the 10 non-permanent members of the Security Council on the latest developments “in days to come, possibly Tuesday”, his spokesperson said. 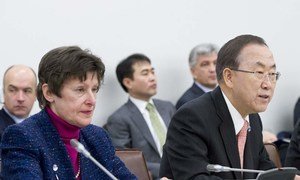 Secretary-General Ban Ki-moon today met with the top United Nations disarmament official, just back from Damascus, on the chemical weapons investigation and the latest developments in Syria. The meeting comes as the UN inspection team arrived in the Netherlands earlier today to carry out a rapid analysis of samples gathered.