A woman votes at a polling station in Bamako, Mali, during the 11 August 2013 presidential election run-off. Photo MINUSMA/Marco Dormino

22 August 2013
United Nations Secretary-General Ban Ki-moon has spoken for the first time with Mali’s President-elect, Ibrahim Boubacar Keita, offering the Organization’s continued support to the political process in the country.

United Nations Secretary-General Ban Ki-moon has spoken for the first time with Mali’s President-elect, Ibrahim Boubacar Keita, offering the Organization’s continued support to the political process in the country.

In a telephone conversation yesterday, Mr. Ban welcomed the peaceful manner in which the elections were conducted and offered support for the implementation of the 19 June Preliminary Agreement between the Government and northern armed groups.

“The Secretary-General pledged the support of the United Nations to the Government of Mali in its efforts to address the root causes of the crisis, including through dialogue and reconciliation,” his spokesperson said.

The 28 July election - as well as the run-off on 11 August - was seen as an important step on the path to recovery for Mali. Since early 2012, the country has witnessed a military coup d’état, renewed fighting between Government forces and Tuareg rebels, and the seizure of its northern territory by radical Islamists.

Acknowledging the election and its contribution to the peace and democracy in the country and the region, Mr. Ban’s Special Envoy for the Sahel, Romano Prodi, today also congratulated President-elect Keita and commended the second place candidate, Soumaïla Cissé.

He also reiterated the regional nature of the challenges and the opportunities in the Sahel, and cautioned that the entire fragile region needs to be supported in building sustainable peace.

The Sahel stretches from Mauritania to Eritrea, including Burkina Faso, Chad, Mali, Niger, Nigeria, Senegal and Sudan, a belt dividing the Sahara desert and the savannahs to the south.

Presenting the UN Integrated Strategy for the Sahel to the Security Council in June, Mr. Prodi said that “success or failure in Mali will affect the entire Sahel” and that the international community must “be as generous to the Sahel as they were towards Mali.” 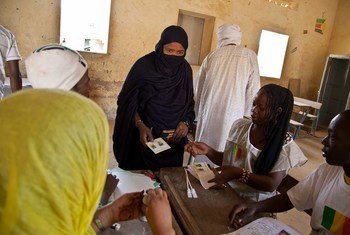