The United Nations today voiced concern about the recent arrest of a prominent human rights defender in Bangladesh and urged the Government to secure his immediate release.

Adilur Rahman Khan, the director of Odhikar, a well-known human rights organization in the country, was arrested at his home in the capital, Dhaka, on 10 August by plainclothes officers reportedly acting without a warrant, according to the Office of the UN High Commissioner for Human Rights (OHCHR).

“We are calling on the Government of Bangladesh to guarantee the physical and psychological integrity of Mr. Khan, whose arrest might be linked to his work as human rights defender,” OHCHR spokesperson Liz Throssell told reporters in Geneva.

She said Mr. Khan is reported to have been arrested under section 54 of the Code of Criminal Procedure and section 57 of the Information and Communication Technology Act, accused of publishing false information about violence by Government forces during demonstrations in May by the Islamist movement, Hefazat-e-Islami.

Odhikar reported that 61 people had died during these protests, challenging the Government’s version of events, noted Ms. Throssell.

She said that the day after his arrest, Mr. Khan was denied bail and ordered to be held on remand for five days.

“He was allegedly denied access to a lawyer before his court hearing,” she added.

♦ Receive daily updates directly in your inbox - Subscribe here to a topic.
♦ Download the UN News app for your iOS or Android devices.
right|defender 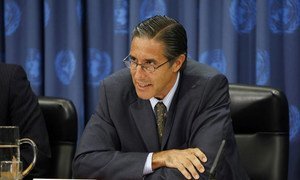 A senior United Nations official today stressed the urgent need for more meaningful and constructive political dialogue in Bangladesh to create conducive conditions for the holding of peaceful and credible parliamentary elections that are scheduled for later this year.