Mr. de Clercq will serve as the Secretary-General’s Deputy Special Representative for the UN Stabilization Mission in Haiti (MINUSTAH), where he will also serve as UN Resident Coordinator, Humanitarian Coordinator and Resident Representative, the spokesperson for Mr. Ban announced today in New York.

The spokesperson added that Mr. de Clercq “brings to the position a solid experience in managing political processes, security sector development, operations and emergency management, protection of civilians and rule of law as well as mobilization of humanitarian and development assistance.”

Mr. de Clercq is currently the Senior Advisor to the head of the UN Assistance Mission in Somalia (UNSOM). Previously, he was the acting UN Resident Coordinator and Humanitarian Coordinator in Sudan.

He also worked with the UN High Commissioner for Refugees (UNHCR) for 27 years during which time he held various positions at its offices in Geneva and Budapest, as well as in field assignments in Sudan, Zimbabwe, Angola and Pakistan.

Mr. de Clercq succeeds Nigel Fisher of Canada, who concluded his appointment with MINUSTAH in July 2013.

“The Secretary-General is grateful to Mr. Fisher for his dedication and service in Haiti, including as his Special Representative ad interim since February 2013,” said his spokesperson. 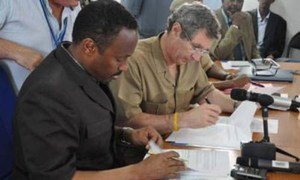 The United Nations and Somalia’s Transitional Federal Government (TFG) have signed an action plan on ending the killing and maiming children in the Horn of Africa country.