9 August 2013
Three independent United Nations experts today called on the Government of Uganda to repeal a new bill that places restrictions on the freedom of peaceful assembly and of association, and to prepare a new version that complies with the country's international human rights obligations.

The Public Order Management Bill, passed on 6 August, prohibits protests of more than three people without prior police authorization, and authorizes police to use guns when policing public events.

Maina Kiai, the Special Rapporteur on the rights to freedom of peaceful assembly and of association, stated that several provisions of the law constitute an undue restriction on the ability for individuals to take part in public assembly.

“Requiring prior authorization from the authorities to hold an assembly may result in an effective ban on certain gatherings, which violates Uganda's international obligations,” he said in a news release.

Mr. Kiai also stressed that “the requirement to list the names of all participants serves only to frighten people from expressing their right to peaceful assembly.”

The Special Rapporteur on the situation of human rights defenders, Margaret Sekaggya, noted that “police intimidation has no place in a free, open and democratic society” and that the use of firearms must be strictly safeguarded.

“The Law fails to limit firearm use; it must ensure they can only be used after exhausting all other possible means, in compliance with the UN Basic Principles on the Use of Force and Firearms by Law Enforcement Official,” she stressed.

Ms. Sekaggy also voiced concern that this law is clearly aimed at obstructing the work of human rights defenders and those who legitimately wish to express their concerns with the Government.

“By excluding assemblies for social, religious, cultural, charitable, educational, commercial or industrial purposes, as well as meetings of any political party from its provisions, it is clear that this law is not intended to protect public safety during public events, but is designed to unduly limit those who wish to publicly defend their human rights,” she said.

Also expressing concern was the Special Rapporteur on the right to freedom of opinion and expression, Frank La Rue, who warned that “the requirement for public statements not to contravene any laws is excessively vague. In fact, it may be used as a tool for censoring all sort of critical statements, undermining a crucial guarantee for democratic governance.”

The experts, who are all appointed by the UN Human Rights Council, drew special attention to the fact that the bill may lead to criminal penalties against organizers of unauthorized assemblies, and vague provisions allow members of the public who are harmed by protests to sue organizers.

“Criminalizing public assemblies which are not authorized by the Government, and creating the risk of serious financial liability for their organizers, are unnecessary restrictions on human rights, and are not necessary to ensure public safety,” they said.

The experts added that this latest legislative development is part of an “increasingly hostile environment” towards civil society and human rights defenders in Uganda.

“Unless this law is amended to comply with Uganda's international legal obligations, it must be revoked. We are at the full disposal of the Government of Uganda to provide any technical assistance it may require to ensure this law meets international human rights law and standards,” the experts said. 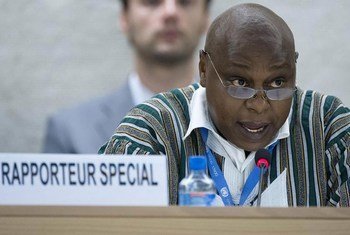 21 June 2012
The rights to freedom of peaceful assembly and of association are violated or at risk in a number of countries, an independent United Nations expert said today, calling on governments to establish minimum standards to protect these rights.