Malians cast their vote for the 2013 presidential elections at the Ecole de la Republique in Bamako. Photo MINUSMA/Marco Dormino
29 July 2013

The United Nations Stabilization Mission in Mali (MINUSMA) has commended the West African country for the peaceful conduct of the first round of its presidential elections, which took place yesterday in an orderly manner.

According to a UN spokesperson, “turnout is reported to have been high across the country,” although no official figures have been released yet.

The 28 July elections were seen as an important step on the path to recovery for Mali, which, over the past year, witnessed a military coup d'état, renewed fighting between Government forces and Tuareg rebels, and the seizure of its northern territory by radical Islamists.

MINUSMA, which provided security support to the Malian Defence and Security Forces throughout the day, reported excellent cooperation between its members and the Malian forces in the provision of electoral security, and said it would continue to help secure the counting centres.

International and national observers were also present in all regions, including the cities of Timbuktu, Gao and Kidal, the Mission said.

Today, the Special Representative of the Secretary-General for Mali, Bert Koenders, together with the heads of the international observer missions and some key ambassadors, met the presidential candidates today to discuss the process and the next steps.

“All were reminded of the need to respect the results, and to address any complaints through established legal processes,” the UN spokesperson told reporters in New York. 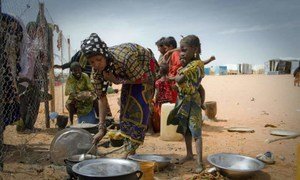 Ahead of polls, UN urges Mali officials to expedite electoral procedures for refugees

With the first round of Mali’s presidential elections scheduled for Sunday, the United Nations refugee agency is calling on Malian authorities to quickly make public voters’ lists and speed up distribution of electoral cards in neighbouring States for out-of-country voters.