“We cannot continue to recite a litany of violations and abuses to little effect either on the warring parties inside Syria or those walking along the corridors of power. It is not enough to be appalled,” Paulo Sérgio Pinheiro, Chair of the International Commission of Inquiry on Syria, said in his briefing to the General Assembly.

Established by the UN Human Rights Council in August 2011, the Commission also includes experts Karen Koning Abuzayd, Carla del Ponte and Vitit Muntarbhorn. It has been mandated to investigate and record all violations of international human rights law during the Syria conflict.

More than 100,000 people have been killed since fighting began between Syrian Government forces and opposition groups seeking to oust President Bashar Al-Assad. Almost 2 million have fled to neighbouring countries and a further 4 million have been internally displaced.

The Commission has provided 10 reports and updates so far, outlining a litany of “crimes that shock the conscience” which have become a daily reality for civilians, who are bearing the brunt of the conflict that began over two years ago. These include: indiscriminate shelling and aerial bombardment; disappearances; torture; sexual violence; and massacres.

Mr. Pinheiro noted that those who continue to perpetuate rights violations do not seem to have any fear of future accountability for their actions. Indeed, shining a spotlight on their unlawful conduct has not had the effect of stopping, or even slowing it.

“That civilians should come under such sustained unlawful attacks should shock your conscience and spur you to action. But it has not,” he told delegates. “As the conflict drags on, you – and the world – have become accustomed to levels of violence that were previously unthinkable. The absence of decisive action, by the community of States as a whole, has nourished the culture of impunity that has developed inside Syria today.

“This war is a chronicle of missed opportunities on the part of influential States and the international community,” he added.

It is time for the international community to act decisively, stressed Mr. Pinheiro, adding that a return to negotiation leading to a political settlement is imperative. He added that accountability must form part of the negotiations if any future peace is to endure. 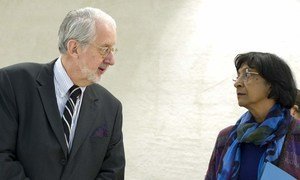 With Syria engulfed in an escalating and increasingly brutal civil war, a panel of United Nations human rights experts today issued its latest report on the crisis, detailing war crimes it says were committed by both the Syrian Government and opposition forces, and calling for a “diplomatic surge” to end the violence.