The frequent use of injections can add to the risk of Hepatitis infection. IRIN/Kamila Hyat
28 July 2013

Marking World Hepatitis Day, the head of the United Nations drugs and crime agency today called for stronger prevention efforts to stop the spread of this major global health risk and urged authorities to ensure that all victims, including injecting drug users and prisoners, get the care and treatment they need.

“All people suffering from viral hepatitis deserve access to the same level of care and treatment available in the community,” the Executive Director of UN Office on Drugs and Crime (UNODC), Yury Fedotov, said in his message for the Day.

“If interventions are to be effective, they must be grounded in respect for the human rights and right to health of all sufferers,” Mr. Fedotov added.

Hepatitis is an inflammation of the liver, most commonly caused by a viral infection. There are five main hepatitis viruses, referred to as types A, B, C, D and E, which lead to 1.4 million deaths every year.

Hepatitis C can lead to liver diseases such as cirrhosis and cancer, and infection is widespread among injecting drug users. According to UNODC's 2013 World Drug Report, global prevalence of hepatitis C among people who inject drugs is estimated at 51 per cent.

Among the prison populations, hepatitis infection is also many, many times higher than in the general population, UNODC said, noting that a majority of people detained will return to their communities, some within months.

“Many of those infected with hepatitis are unaware, and therefore may go undiagnosed and untreated, posing a risk of transmission to their families, coworkers and neighbours,” Mr. Fedotov noted.

UNODC and its UN partners promote an integrated response to preventing hepatitis and providing treatment and care, the senior UN official said. This includes comprehensive packages of interventions for injecting drug users and prisoners to stop the spread of HIV and other infectious diseases such as hepatitis B and C.

The World Health Assembly – the decision-making body of WHO – designated 28 July as World Hepatitis Day. The Day serves to promote greater understanding of hepatitis as a global public health problem and to stimulate the strengthening of preventive and control measures against infection in countries throughout the world.

Coinciding with this year's marking of the Day, WHO released its first-ever country hepatitis survey. Covering 126 countries, the 'Global policy report on the prevention and control of viral hepatitis in WHO member States' identifies successes as well as gaps at country level in the implementation of four priority areas: raising awareness, evidence-based data for action, prevention of transmission, and screening, care and treatment.

The findings show that only one-third of the world's countries have national strategies for viral hepatitis, leading WHO to urge Governments to scale up measures to tackle the spread of the disease. 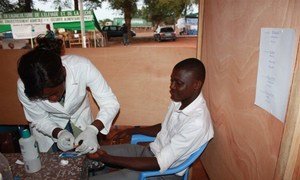 Only one-third of the world’s countries have national strategies for viral hepatitis, the United Nations health agency today said urging Governments to scale up measures to tackle this ‘silent epidemic,’ in particular the five types that, over time, cause chronic and debilitating illnesses.