Secretary-General Ban Ki-moon and United States Secretary of State John Kerry, speaking to the press at United Nations Headquarters in New York, stressed that a political solution is the only way to end the Syrian conflict, adding that they would step up efforts to facilitate dialogue among all parties.

“More than 100,000 people have been killed, and millions of people have either been displaced or become refugees in neighbouring countries. We have to bring this to an end,” Mr. Ban told reporters ahead of closed-door talks between the two officials and a ministerial-level Security Council meeting on Africa’s Great Lakes region, which Mr. Kerry will chair.

“Military and violent actions must be stopped by all the parties and it is thus imperative to have a peace conference in Geneva as soon as possible, as initiated by Mr. Kerry and Mr. Lavrov,” the Secretary-General underscored, adding that he and Joint Special Representative Lakhdar Brahimi would spare no effort to convene this meeting as soon as possible.

In May, following talks in Moscow between Russian Foreign Minister Sergey Lavrov and Mr. Kerry, the two countries announced they would work together to achieve a political solution to the Syria crisis, and agreed to convene an international conference aimed at achieving this goal.

US Secretary of State John Kerry chairs the Security Council debate on the situation in the Great Lakes region. UN Photo/Mark Garten

However, a date for the conference has not yet been set and talks are continuing on the best time for it to be held, who should participate, how it should be structured and some of the questions to be discussed.

“There is no military solution to Syria, there is only a political solution and that will require leadership to bring people to the negotiating table,” Mr. Kerry said, adding that he and Mr. Lavrov remain committed to make the Geneva meeting happen.

The UN chief commended Mr. Kerry’s leadership and consistent engagement to revive the peace process for a two-State solution. He urged the leaders of Palestine and Israel to “seize this opportunity and respond positively and courageously so that the two-State solution can be realized as soon as possible.”

On the Great Lakes and the situation in the Democratic Republic of the Congo (DRC), both Mr. Ban and Mr. Kerry underlined the need to follow the Peace, Security and Cooperation Framework, and reiterated the commitment of their Special Envoys in the region to work together.

The Framework was signed in February by 11 African leaders, and aims to end the cycles of conflict and violence in eastern DRC and to build peace in the wider region.

Mr. Ban also thanked Mr. Kerry for the US Government’s support for initiatives that seek to advance sustainable development and combat climate change. 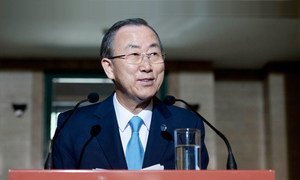 The international conference proposed by Russia and the United States offers the best chance to resolve the crisis that has overwhelmed Syria and threatens to engulf the whole region, and should be held as soon as possible, Secretary-General Ban Ki-moon stressed today.