“Irina Bokova calls upon the perpetrators to cease the destruction immediately and urges all the parties to the conflict to take the necessary measures to ensure the safeguarding of this World Heritage site along with all of Syria’s cultural property,” the UN Educational, Scientific and Cultural Organization (UNESCO) said in a statement today citing its Director-General.

Ms. Bokova also reminded all parties involved in the conflict of their legal obligations under the 1954 Hague Convention for the Protection of Cultural Property in the Event of Armed Conflict, to which Syria is a signatory and which enjoins High Contracting Parties, to refrain from any act of hostility directed against cultural property.

The UN agency added that it stands prepared to cooperate with all parties concerned in deploying “all possible efforts” to protect Syria’s cultural monuments to the extent allowed by the volatile security situation.

The Crac des Chevaliers, which Ms. Bokova has called, along with the other damaged castle, Qal’at Salah El-Din, “outstanding examples” of the region’s fortified architecture developed starting in the 11th century, is among six sites in Syria recently inscribed to the UNESCO List of World Heritage in Danger.

UNESCO said the inscriptions demonstrated the serious concern of the international community over the threats facing the heritage of the country during the current civil strife and turmoil.

“The danger listing is intended to mobilize all possible support for the safeguarding of these properties, which are recognized by the international community as being of outstanding universal value for humanity as a whole,” the UN agency had said in a statement.

Members of the World Heritage Committee “urged all parties associated with the situation in Syria to refrain from any action that would cause further damage to cultural heritage of the country and to fulfil their obligations under international law by taking all possible measures to protect such heritage.”

In an earlier statement, Ms. Bokova had said that “destroying the inheritance of the past, which is the legacy for future generations, serves no purpose except that of deepening hatred and despair and it further weakens the foundations for cohesion of Syrian society.” 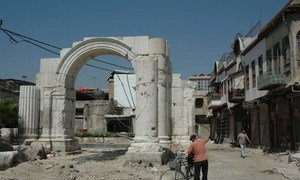