15 July 2013
Senior United Nations officials learned about the many hardships facing Palestinian refugees from Syria during a recent visit to a camp in southern Lebanon, as well as the difficulties facing the UN agency assisting them owing to lack of funding.

Senior United Nations officials learned about the many hardships facing Palestinian refugees from Syria during a recent visit to a camp in southern Lebanon, as well as the difficulties facing the UN agency assisting them owing to lack of funding.

The families in Ein El Hilweh refugee camp in Saida fled the long-running conflict in Syria, which has uprooted millions of people since fighting began between Government forces and opposition groups in March 2011.

During the 11 July visit, the UN Resident and Humanitarian Coordinator in Lebanon, Robert Watkins, accompanied by Leila Zerrougui, the Secretary-General's Special Representative for Children and Armed Conflict, and Ann Dismorr, the Director of Operations in Lebanon for the UN Relief and Works Agency for Palestine Refugees in the Near East (UNRWA), met with Palestinians currently residing in collective temporary accommodation.

“The families, wishing for an immediate end to the violence in Syria and a speedy return to their homes, told them about the difficult conditions they face in Lebanon, the high cost of living and the trauma of war and displacement,” said a news release issued by UNRWA.

The UN officials also met with Palestinian refugee children from Syria who are enrolled in UNRWA schools, a number of non-governmental organization representatives and the Palestinian popular committees.

Ms. Dismorr briefed her colleagues on UNRWA efforts to alleviate the suffering of the 71,000 Palestinian refugees from Syria that are now in Lebanon, as well as the challenges facing the Agency as it works to address their urgent needs in housing, food, water, camp infrastructure, health and education.

“The conflict in Syria is one of the greatest challenges UNRWA has seen since it was established, in 1949, to provide relief to Palestine refugees,” she said.

The UN envoys were also informed about the shortfall in the UNRWA relief fund for Palestinian refugees from Syria, and the Agency's efforts to raise the funds to cater for their needs.

On 7 June, UNRWA appealed for $65 million to cover the needs of Palestinian refugees from Syria from January to December 2013. Of that sum, the Agency has received over $25 million, and has confirmed pledges of an additional $3 million.

“We are committed to providing vital services and support to the refugees who have come to Lebanon,” Ms. Dismorr said, reiterating the refugee families' wish for a swift end to the violence in Syria. 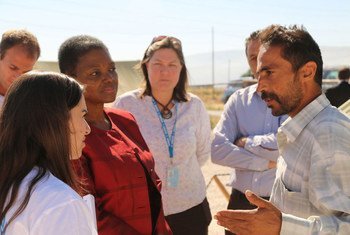 2 July 2013
The United Nations humanitarian chief today called for support for the more than half a million Syrian refugees that have fled to Lebanon and the local communities hosting them, stressing that the crisis is taking a toll on the country's economy.