27 June 2013
Negotiators at a United Nations-backed forum in Marrakesh adopted today a landmark copyright treaty to enhance access to books for millions of people who are blind or visually impaired.

The treaty, approved after more than a week of intense debate among negotiators meeting under the auspices of the World Intellectual Property Organization (WIPO), is the culmination of years of work on improving access for the blind, visually impaired, and print-disabled persons to published works in formats such as Braille, large print text and audio books.

“This treaty is a victory for the blind, visually impaired and print disabled, but also for the multilateral system,” said WIPO Director General Francis Gurry.

“With this treaty, the international community has demonstrated the capacity to tackle specific problems, and to agree a consensus solution,” he said, adding that the accord is balanced and “represents a very good arbitration of the diverse interests of the various stakeholders.”

According to the World Health Organization (WHO), there are more than 314 million blind and visually impaired persons in the world, 90 per cent of whom live in developing countries.

However, the World Blind Union estimates that of the million or so books published worldwide every year, less than five per cent are made available in formats accessible to visually impaired persons.

The treaty, called the Marrakesh Treaty to Facilitate Access to Published Works for Persons who are Blind, Visually Impaired, or otherwise Print Disabled, requires parties to adopt national law provisions that permit the reproduction, distribution and making available published works in accessible formats without having to seek permission from copyright holders in each case.

It also allows the exchange of accessible format works across borders by organizations that serve people who are blind, visually impaired, and print disabled. This will increase the availability of accessible works as different countries will be able to each produce accessible versions of materials, which can then be shared with each other instead of duplicating efforts by adapting the same work.

The treaty also ensures authors and publishers that the system will not expose their published works to misuse or distribution to anyone other than the intended beneficiaries.

Last week, music icon Stevie Wonder had appealed to more than 600 forum negotiators from 186 countries to finalize the treaty, and promised to celebrate with them in Morocco when the agreement concluded. Mr. Wonder, who is also a UN Messenger of Peace, has long been a supporter for the rights of persons with disabilities.

The music legend will honour his promise by holding a concert tomorrow – the last day of the conference – at the Palais de Congres in Marrakesh. The treaty will enter into force after it has been ratified by 20 WIPO members that agree to be bound by its provisions. 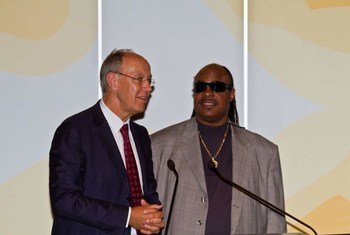 21 June 2013
Stevie Wonder has appealed to more than 600 negotiators at a United Nations forum in Marrakesh to finalize a new global treaty easing access to books for blind, visually impaired, and other print disabled people – promising to celebrate with them in Morocco when the agreement is concluded.