A United Nations independent expert today urged Morocco to put victims at the centre of its measures to combat human trafficking, citing the lack of protection and support services in the country for migrants who are particularly vulnerable to this scourge.

“Irregular migrants are increasingly at risk of trafficking for the purposes of forced labour, services including domestic servitude and sexual exploitation.”

Ms. Ezeilo welcomed the Government’s ratification of the Protocol to Prevent, Suppress and Punish Trafficking in Persons, especially Women and Children, and urged it to translate its standards into specific actions to protect and assist victims, prevent trafficking and punish perpetrators.

States that ratify the Protocol commit to prevent and combat trafficking in persons, protect and assist victims of trafficking and promote cooperation among States to meet those objectives.

Ms. Ezeilo said Morocco should implement a data collection mechanism for determining the prevalence rate, forms, trends and manifestation of human trafficking in the country.

“Victims of trafficking are most often not being identified or being misidentified as smuggled and/or irregular migrants due the absence of appropriate tools and protocols for victim identification,” she said.

The Special Rapporteur also expressed concern over the availability of protection services for victims, and urged authorities to create effective policy and institutional frameworks for combating trafficking, such as developing a national plan of action, and creating a national agency to coordinate anti-trafficking activities of Governmental institutions.

During her five-day mission, Ms. Ezeilo met with Government officials, authorities, the judiciary, national institutions involved in the fight against trafficking in persons, as well as representatives of international organizations, civil society, and victims of trafficking and/or their representatives.

The Special Rapporteur visited Rabat, Casablanca and Tangier and welcomed the authorities’ readiness to institutionalize best practices as seen in hospital and court-based responses to gender-based violence, but urged them to enhance capacity-building to identify cases of trafficking in persons, take further measures to reduce vulnerability of potential victims, and ensure adequate protection of migrants and their families.

In addition, she encouraged the Government to broaden its cooperation with other country on this issue, noting the cross-border dimension of trafficking.

Independent experts, or special rapporteurs, are appointed by the Geneva-based UN Human Rights Council to examine and report back, in an unpaid capacity, on specific human rights themes. Ms. Ezeilo will present her findings and recommendations in a comprehensive report to the Council in June 2014. 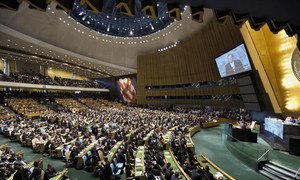