20 June 2013
In Kosovo today, the top United Nations human rights official hailed progress in normalizing relations with Serbia and in carrying out local-level reform initiatives, but also urged broader cooperation to comprehensively heal past wounds and pave the way for an inclusive future.

“Inevitably the effects of conflict, especially of a conflict carried out largely along ethnic and religious fault lines, are still not fully resolved,” Navi Pillay, UN High Commissioner for Human Rights, told reporters during a press conference culminating her visit to the region.

Noting that her visit coincided with World Refugee Day, she said that it was a heartening reminder of unresolved issues concerning the human rights of two million people who fled Kosovo in 1998-99, returnees, internally displaced persons (IDPs), missing persons, and justice and reparation for victims of conflict-related crimes.

“There needs to be further cooperation, especially with Belgrade, in order to ensure comprehensive solutions are found for all those forcibly displaced in the 1990s,” she said.

During her visit, Ms. Pillay held meetings with representatives of the Kosovo executive authorities, judiciary and the Assembly. She also met with the Ombudsperson and members of civil society, and visited the Serb-majority municipality of Gracanica and the Balkans Sunflowers Learning Centre in Kosovo Polje, for children from Roma, Ashkali and Egyptian communities.

“I am encouraged by the recently concluded Agreement in Brussels and continuing positive dialogue with Belgrade, which took a further step forward with Monday’s first-ever exchange of liaison officers,” she continued, welcoming that the Agreement also aims to improve the rule of law and human rights for all in the north of Kosovo.

She said that in her talks she also pointed out some issues of concern, in particular the proposed plans for the adoption of an amnesty law and the arrangement of the judiciary along ethnic lines. “I also urged a stronger focus on human rights concerns in the future dialogue between Pristina and Belgrade,” she added.

On the various reform initiatives underway, including in the judicial system and public administration, the High Commissioner said that overall, what she heard from many interlocutors is that a good legal and institutional framework with regard to human rights is in place.

“As is the case everywhere, a broad, transparent and consultative approach is vital if good and sustainable results are going to be achieved,” she said, noting that she was impressed by the commitment and competences of the Ombudsperson Institution, as well as the vibrant, active and articulate civil society.

At the same time, she emphasized that she had also raised some specific concerns related to the weaknesses of the rule of law institutions in Kosovo, including the importance of ensuring the independence of the judiciary, and addressing lengthy pre-trial detention, case backlog, lack of trust in the judiciary and the lack of execution of judicial decisions.

“I have impressed on the authorities here the importance of remedying poor legislation and discriminatory practices, as well as taking a tough line against all instances of hate speech,” she said, adding: “In short, there should be no discrimination against anyone because of who they are or what they do.”

Ms. Pillay said that given its history, progress on non-discrimination and tolerance of all minorities, including Serbs, Roma, Ashkali, Egyptians, Gorani, and other groups within Kosovo, as well as those still displaced outside, is an important indicator of how far society’s wounds have healed, and how much more remains to be done.

She was also concerned at attempts by the Kosovo Liberation Army (KLA) War Veterans Association and some MPs to stifle arrests of former KLA members allegedly implicated in war crimes. “A war crime is a war crime,” she declared, “and anyone who has committed one – whether friend or foe – must be brought to justice. Justice for one side only is counter-productive in the long term as a blatant violation of human rights.”

Ms. Pillay called for a sustained and comprehensive effort by all those involved in improving education, which will be of critical importance for Kosovo’s future generations, and their ability to live, work, communicate and participate in development together.

“Let us not forget that Kosovo has the youngest population in Europe. Inclusive education for all children should be given priority,” she said, explaining that human rights education, in particular, will be a vital part of that effort, and the role of civil society actors and human rights defenders will be the key to the formation of a deeply-rooted human rights culture. 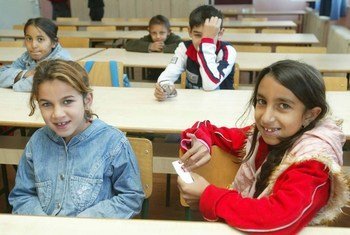 18 June 2013
Visiting Serbia at “an important and transformative moment” in its history, the United Nations human rights chief today urged a steadfast focus on fundamental rights as she hailed a succession of political advances that augur well for the country itself and for the future of the wider region.