UNHCR/C. Arnaud
After fighting began between Nigerian forces and Boko Haram, a family from Borno state fled to Niger.

18 June 2013
The United Nations refugee agency today reported that the ongoing crisis in north-eastern Nigeria is continuing to send people fleeing to Niger and now to Cameroon amid the insecurity resulting from confrontations between the army and insurgents.

The United Nations refugee agency today reported that the ongoing crisis in north-eastern Nigeria is continuing to send people fleeing to Niger and now to Cameroon amid the insecurity resulting from confrontations between the army and insurgents.

The Nigerian Government imposed a state of emergency on the Adamawa, Borno and Yobe states in the north-east of the country in May. In recent weeks, anti-insurgent operations and general insecurity have uprooted thousands of people, with more than 6,000 already having fled to Niger for safety.

A team from the UN High Commissioner for Refugees (UNHCR) that visited the area along Cameroon’s border with Nigeria reported the presence of over 3,000 Nigerians.

“Crossings of Nigerians into Cameroon began a week ago, with people telling us they had fled a confrontation between the Nigerian army and Boko Haram insurgents some 10 kilometres from the border,” UNHCR spokesperson Adrian Edwards told reporters in Geneva.

“Most of those who have arrived so far are women and children,” he added. “They are being hosted in churches and schools, and relying on food from the churches and local population.

“We are working with the authorities to relocate the refugees to safer places away from the border.”

Meanwhile, the agency has sent aid by trucks from Niamey, Niger’s capital, to the south-eastern Diffa region, where the over 6,000 people that arrived in recent weeks are currently staying.

Mats, blankets, jerry cans, soaps, buckets, mosquito nets and kitchen items have been pre-positioned in Diffa, Bosso, Kablewa and Menesewa and will be distributed to both Nigerian refugees and Nigerien returnees, Mr. Edwards stated.

“People are still arriving in Niger,” he noted. “At the same time, our teams observed that some displaced persons from Nigeria are returning home after a few days in Niger or shuttling between the two countries depending on the security situation in Nigeria,” he added.

Mr. Edwards said there have been no further arrivals of Nigerians in Chad beyond the 155 received last week. “There, the border is officially closed,” he noted. 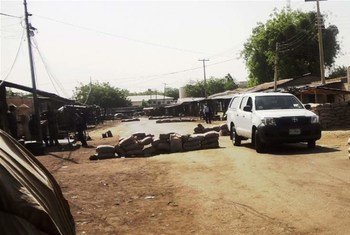 11 June 2013
Anti-insurgent operations and general insecurity have uprooted thousands of people in north-eastern Nigeria, with more than 6,000 of them fleeing to neighbouring Niger for safety, the United Nations High Commissioner for Refugees (UNHCR) reported today.