UNRWA
UNRWA is trying to help the over 400,000 Palestine refugees from Syria in need of humanitarian assistance.
17 June 2013

Warning that the centrifugal force of the Syria crisis continues to imperil the region, a senior United Nations agency official today said that more than half of the Palestinian refugee camps in Syria have become “theatres of war,” where killings and kidnappings have become the norm.

According to the Commissioner-General of the UN Relief and Works Agency for Palestine Refugees in the Near East (UNRWA), Filippo Grandi, seven out of 12 of the agency’s camps are now virtually inaccessible.

“Killings, kidnappings, poverty, destruction and fear have become part of daily life,” he said at the bi-annual meeting of UNRWA’s Advisory Commission in Amman, Jordan.

He also said that of the 530,000 Palestinian refugees registered with the United Nations in Syria are believed to be displaced, an official for the world body said today. Some 15 per cent of all Palestinian refugees have fled abroad, including more than 60,000 that are now in neighbouring Lebanon and 7,000 in Jordan.

The conflict in Syria has affected humanitarian access and disrupted education and health services, exacerbating stress and uncertainty in refugee communities, according to UNRWA, which has provided basic services, and at times emergency assistance, to Palestinian refugees in Syria, Jordan, Lebanon, the West Bank and Gaza for over 63 years.

“The distress of Palestine refugees in Syria and displaced from Syria has given the lack of progress in the Israeli-Palestinian peace process an added, and very stark dimension,” Mr. Grandi said.

“For refugees, this might well be another tragic turning point. They feel it very strongly,” he said, because, across the lands of their painful and protracted exile, Palestinians are connected to each other by their history, their present and their future. “The loss of camps in Syria and the uncertainty that it has wrought, are suffered by all, just as the bombardments in Gaza.”

Prior to March 2011, when the uprising against Syrian President Bashar Al-Assad began, Palestinian refugees were already among the poorest communities in the country, with 27 per cent of the population estimated to be living below the poverty line – $2 per day – and over 12 per cent unable to meet their basic food needs.

UNRWA joined the UN’s recent appeal for funds to respond to the Syrian crisis for 2013. The agency is asking donor for a total of $200 million for its Syria-related emergency activities.

Mr. Grandi described the current situation as “challenging” and noted that while austerity measures remain in place, the agency is still short of $65 million for its operations this year.

“The struggle to bridge the gap will be more intense because internal financial management has been tightened almost to breaking point,” he added. 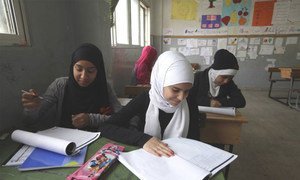 Should we keep a school open, or not; should the health centre shut its doors, or not. These are just some of the questions the dedicated staff members of the United Nations Relief and Works Agency for Palestine Refugees in the Near East (UNRWA) have to answer on a daily basis as they carry out their work in embattled Syria.