FAO/Roberto Faidutti
Tomatoes produced for sale at a market in Ghana.

“These countries are leading the way to a better future. They are proof that with strong political will, coordination and cooperation, it is possible to achieve rapid and lasting reductions in hunger,” UN Food and Agricultural Organization (FAO) Director-General José Graziano da Silva said.

Amid the 1,000 days of action for the eight anti-poverty targets known as the Millennium Development Goals (MDGs), 38 countries have met part of the first MDG which calls on Member States to halve by 2015 the proportion of people who suffer from hunger.

Mr. Graziano da Silva urged all countries to keep up the momentum, aiming for the complete eradication of hunger, in keeping with the Secretary-General Ban Ki-moon’s Zero Hunger Challenge.

First proposed at the UN Conference on Sustainable Development (Rio+20) in Brazil last June, the challenge aims for a future where every individual has adequate nutrition.

Its five objectives are to make sure that everyone in the world has access to enough nutritious food all year long; to end childhood stunting; to build sustainable food systems; to double the productivity and income of smallholder farmers, especially women; and to prevent food from being lost or wasted.

“Globally, hunger has declined over the past decade, but 870 million people are still undernourished, and millions of others suffer the consequences of vitamin and mineral deficiencies, including child stunting,” said Mr. Graziano da Silva.

“We need to keep up our efforts, until everyone can live healthy, productive lives.”

While some 870 million people were still hungry in 2010-2012, this is just a fraction of the billions of people whose health, well-being and lives are blighted by malnutrition, FAO said in its flagship annual report launched earlier this month.

Two billion people suffer from one or more micronutrient deficiencies, while 1.4 billion are overweight, of whom 500 million are obese, according to “The State of Food and Agriculture (SOFA)”.

It adds that 26 per cent of all children under five are stunted and 31 per cent suffer from Vitamin A deficiency.

On June 16, FAO said it will honour the 38 countries that reached the anti-hunger targets in a high-level ceremony at its headquarters in Rome.

The first MDG also includes targets for halving the proportion of people whose daily income is less than $1.25, and achieving full and productive employment and decent work for all. 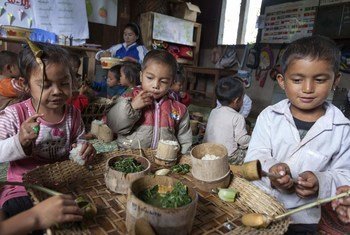 UN food, agriculture chief urges ‘nothing less than the eradication of hunger and malnutrition’

4 June 2013
The head of the United Nations Food and Agriculture Organization (FAO) today called for greater efforts to combat malnutrition and hunger worldwide as the agency launched its flagship annual report, which this year focuses on improved food systems for better nutrition.