3 June 2013
The head of the new United Nations Assistance Mission in Somalia (UNSOM) today pledged to support the Government and the people of the country in their quest for security and prosperity, as he arrived in the country’s capital for the Mission’s start of operations.

“I am very pleased to be in Mogadishu and to have this opportunity to support the federal Government and people of Somalia to bring peace, security and prosperity back to Somalia,” said the Secretary-General’s Special Representative for Somalia, Nicholas Kay, upon his arrival in the country.

“Somalia is a proud country with ancient traditions, a vibrant culture, and strong values. I will not forget that as I strive to support the Somali Government and people in their quest for peace.”

Last month, the Security Council unanimously voted to establish a new UN Assistance Mission in Somalia to be based in Mogadishu. The Mission’s mandate begins today for an initial period of 12 months.

As part of its mandate, UNSOM will support State building and peacebuilding with a focus on good governance, security sector reform, rule of law, human rights, providing “good offices” for mediation and political reconciliation and coordination of international assistance.

“This is an historic moment for Somalia,” said Mr. Kay, who will lead UNSOM efforts. “The people of Somalia rightly have high expectations. We need to aim high. We look forward with hope towards a national election in 2016. The challenges are tremendous, but we must work hard to seize the moment.”

UNSOM will incorporate the work of the UN Political Office for Somalia (UNPOS) and the UN Support Office for AMISOM (UNSOA), which had backed the African Union Mission in Somalia (AMISOM) since its inception in 2007.

Mr. Kay paid tribute to the UNPOS team, stating it had completed its mission, and added that UNSOM marks the beginning of a new phase for the UN in Somalia.

“The people of Somalia have asked the UN for a new partnership to match their aspirations,” he said. “The UN effort will become more unified, more joint and more effective – based on the principles of true partnership with the African Union and all other partners of Somalia. The international community has recognized this through its commitment to support UNSOM.”

Over the next few days Mr. Kay will meet with Somali President Hassan Sheikh Mohamud and Government officials, as well as representatives from AMISOM and civil society groups.

Mr. Kay had previously served as Africa Director at the United Kingdom’s Foreign and Commonwealth Office, a position he has held since 2012. Prior to this, he served as Ambassador to the Republic of the Democratic of the Congo and Sudan from 2007 to 2010 and 2010 to 2012, respectively. 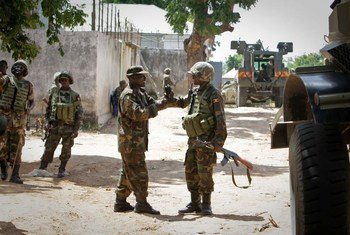 2 May 2013
The Security Council today voted unanimously to establish the United Nations Assistance Mission in Somalia, to be known as UNSOM and to be based in the country’s capital, Mogadishu, beginning on 3 June for an initial period of 12 months.